Why Indian Armed Forces Are Considered As Moral Forces 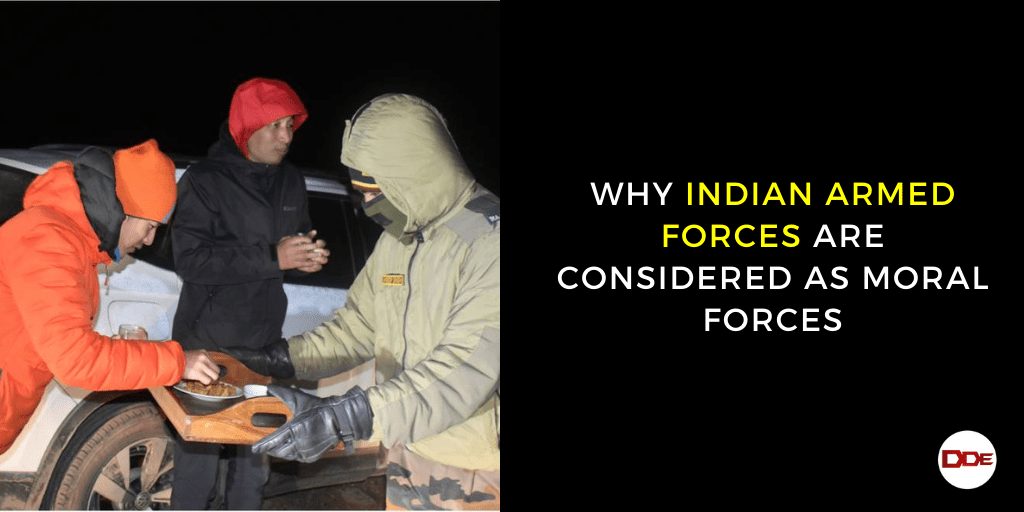 Why Indian Armed Forces Are Considered As Moral Forces

Indian Armed Forces have a legacy of Bravery, Courage and Camaraderie. The Forces always follow the Quote “Hum Dushmani mein bhi Sharafat rakhte hai”. There are many instances in past and recently also, which portrays that Indian forces are Moral Forces.

In the past, a Pakistani boy crossed the border to drink water from tube well. After reviewing the situation, the BSF personnel released the boy and handed over him to Pakistani Rangers. Even on to the China also, when the citizens of China were stuck in Mountains of Sikkim. The Indian Army helped them with the Medical Assistance, food and rescued them.

Unlike the Neighbours, where Pakistan captures our fishermen and arrest them for crossing the International waters. And China recently kidnapped 5 people in the Arunachal Pradesh region.

At the time of Natural Calamities, security threat and now in the time of pandemic Indian forces are always there with people of India. In the Recent times, the Indian Army made a Quarantine centre of people arriving from outside of India in Jodhpur. The Indian Air Force flew many sorties when there was crisis in the Yemen to rescue the Indian Nationals. At this pandemic time, the Indian Navy launched the Operation Samundra Setu to bring back Indians from Maldives.

The Indian Armed Forces have always acted upon the first call of emergency. The bravery and courage are our men are to be hold in the Highest Regards. This shows that unlike our neighbours, India is always ready help to people who are in danger. Salute to Indian forces who keep their moral values first Always.

Akash Missile System – All You Need To...