Meet The Most Badass Lieutenant General Of Indian Army 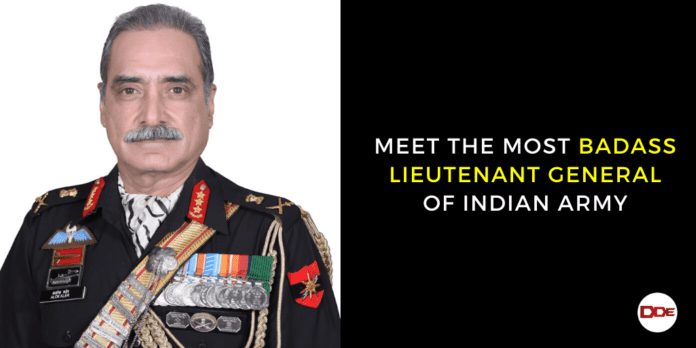 Meet The Most Badass Lieutenant General Of Indian Army

Lt Gen Alok was born into the Kler military family which originated in Kakrala Kalan near Ludhiana, Punjab, India. The family has over 300 years of service in the Indian Armed Forces. His father, Gen Gurdev Singh Kler was Mentioned in dispatches (MiD) in Sialkot in Indo-Pakistani War of 1965 fighting with 18th Cavalry. Commanding 56 Brigade, he was awarded the Ati Vishisht Seva Medal (AVSM) for capturing the largest group of armed insurgents in Nagaland in the 1970s. Commanding an armoured brigade and division, he was Director General of Military Training (DGMT) and commanded the Armoured Corps Centre and School in Ahmednagar, Maharashtra before retiring as a Lieutenant General.

His elder brother, Jasjit Singh Kler was in the Indian Air Force. He served as the Commandant of the National Defence Academy before retiring as an Air Marshal. His Uncle, Gen Hardev Singh Kler was awarded the Mahavir Chakra in the Indo-Pakistani War of 1971 for commanding 95 Brigade. His formation was among the first to enter Dhaka. Alok’s father-in-law, Brigadier Narinder Singh Sandhu saw action in both the wars of 1965 and 1971 and was awarded the Mahavir Chakra. Alok attended Mayo College, Ajmer before graduating from the National Defence Academy and the Indian Military Academy.

Lt Gen Kler was commissioned into 68 Armoured Regiment in June 1982. He has attended Defence Services Staff College at Wellington, the Battalion Commander Combat Course at Germany, the Higher Command Course at Army War College, Mhow, and the National Defence College at Bangladesh.

Kler commanded an Armoured regiment, an Armoured Brigade in the western sector and the same Armoured Division which was commanded by his father. He later commanded the Strike Corps (II Corps) in the Western theatre. He has also held important staff positions like the Chief of Staff of Army Training Command (ARTRAC). He later served as the Director General Military Training (DGMT). He has been awarded the Vishisht Seva Medal in 2015 and a COAS Commendation card in 2009.

Kler has a keen interest in cycling, fitness and sports. He made news when he cycled 270 km from Delhi to Jaipur to take command of the South Western Command. As an Army Commander, he was entitled to fly down to his headquarters or drive down in a cavalcade of military vehicles.

“Cycling is a terrific workout and I am passionate about it. I believe fitness should be a personal mission and not imposed by the organisation. It sends a message of fitness to the men under my command and others too,” said Gen Kler.