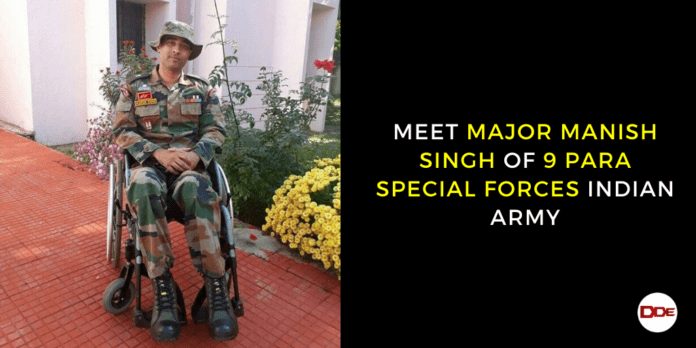 Year 2012 : Lieutenant Manish Singh was a troop commander with 9th Battalion the Parachute Regiment since 01 Apr, 2011. As part of search and destroy operation of 30 RR at general area of Kupwara District in Jammu and Kashmir on 25 September 2012, his squad was tasked to track escaping terrorists through terraced maize fields. During the search, a terrorist suddenly opened indiscriminate fire injuring Lieutenant Manish Singh and pinning down his squad. In a display of extreme courage and utter disregard for his own safety, despite his severe injuries due to a bullet hit in his spinal cord, Lt Manish crawled forward and kept the terrorist pinned down.

During the encounter, the officer displayed leadership of the highest order in refusing to be evacuated and notwithstanding his grievous injuries and blood loss, held on to his position. Finally as the terrorist charged upon him, he shot him dead at near point blank range. His courageous action ensured the safety of his men and ruled out collateral damage to civilian houses.

For his act of showing courage of exemplary order, conspicuous gallantry and outstanding leadership in the highest traditions of the Indian Army, Lieutenant Manish Singh was conferred the award of “SHAURYA CHAKRA” during the republic day celebrations 2013.

Two years after he was shot at by an Afghan militant in Kashmir, Captain Manish Singh, who was left paraplegic by the injury, can walk again, thanks to 18-month stem cell treatment. Coupled with rehabilitation, Capt Singh, who could not even sit, is now mobile with the help of calipers. Buoyed by the improvement, he is now determined to return to the Special Forces he was assigned to.

After an AK47 bullet ripped through his stomach, Singh was injured in the D12 vertebra; he became paraplegic and lost control over bowel and bladder functions. “I was taken to a hospital in Sringar and then to the army hospital in Delhi where I was operated upon. Though my upper body functions were normal, I had no sensation or motor control below my navel,” said Singh, who is originally from Ludhiana. While rehabilitating at the army hospital at Kirkee in Pune, a colleague from the army suggested to Singh about stem cell therapy and rehabilitation.

“Capt Singh arrived at our centre in an ambulance, incapable of any movement,” said Dr Alok Sharma, director, Neuro Gen Brain and Spine Institute, Nerul. “There are a number of reasons why I was confident of great results from our treatment: First, he was provided with precise medical care for the first four months. Secondly, he is young, thirdly, him being an army man, he is determined and extremely focused,” said Dr Sharma, who is also the head of neurosurgery department at Sion Hospital.

The series of four stem therapy at the clinic was interspersed by bed mobility techniques that included rolling and shifting from bed to wheelchair and vice versa, gait training, ambulation lessons and physiotherapy, which comprised push-knee splints and balance training to improve trunk balance.

Now almost back on his feet, Capt Singh will return to Kirkee in September and after a week, he will travel to Mhow, an army cantonment in Madhya Pradesh where he will go to infantry school.

“I feel better, stronger and more determined to return to my life as it was. I want to get back into shooting, to represent India at the next Commonwealth Games,” said Singh.

“What makes this case special is that Singh never gave up hope. He doesn’t even encourage his parents to visit as it is emotional for him,” said Dr Sharma.

In earlier years, people tried to show sympathy, motivate him, used him, misused him, but also loved him, respected him, prayed for him. But his aim was fixed. On 25.09.2012 his battle didn’t end. It just started. He fought it with equal bravery. Now Capt. Manish Singh is going to start his new innings.

When he fought the battle in the Hafurda jungle, we were unaware of the situation. We didn’t know him. But today when we know him, his bravery and his future dream, lets wish to express our love, respect and best wishes to the young and brave hero of our motherland.

The story of Major Manish Singh, 9 Para, Shaurya Chakra will give you goosebumps and motivate you to join the Special Forces.
Read : HTTPS://T.CO/W6HIX8LEKT#indianarmy #specialforces #parasf #JaiHind pic.twitter.com/NbVchyIOWn