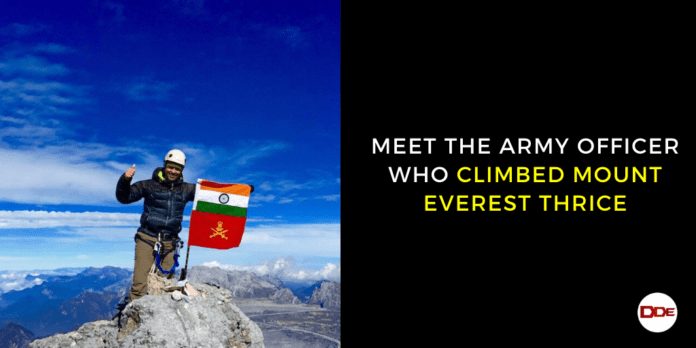 Meet The Indian Army Officer Who Climbed Mt Everest Thrice. Col Ranveer Singh Jamwal has been at the highest point on the planet thrice when he summited Everest in 2012, 2013 and 2016. His derring-do has earned him the Vishisht Seva Medal twice, the Tenzing Norgay National Adventure Award and a host of other distinctions. Col Ranveer Singh Jamwal, VSM was born on 26 Dec 1975 in a small village called Badhori in Samba District in Jammu and Kashmir, and spent his entire childhood there.

Hailing from sturdy mountain stock, he spent his childhood pursuing sport of every kind, excelling in football and javelin, consistently winning gold. Along with a love for the outdoors, Jamwal also inherited a legacy of service to the nation. His father and grandfather had served in the Army. Col Jamwal’s father, Onkar Singh, is a retired havaldar of the Army from whom he imbibed the virtues of hard work and tenacity. The major’s motto has always been: ‘do not think in terms of limitations; always think in terms of possibilities’.

Since his early years, he had always dreamt of joining the elite Indian Army and serving the nation. He has done his schooling from Army School, Ratnuchak. He was enrolled in the army on 24 Oct 1994 and joined the DOGRA Regiment (15 DOGRA). The officers of Dogra Regiment guided him through the early years. With his sheer hard work, dedication and will power, he cleared the Officer Examination (Army Cadet College) and joined Indian Military Academy in 1998. After four years of strict disciplinary training from Indian Military Academy, Dehradun, Col Ranveer Singh Jamwal, got commissioned into 11 JAT in Jun 2002.

He had an inclination towards sports and adventure since his childhood days. After joining 11 JAT, he volunteered to undergo a course in Mountaineering at High Altitude Warfare School, Gulmarg where he was adjudged the Best Student and was given an instructor grading in mountaineering and skiing. After spending three years in the school as instructor of mountaineering and skiing from Apr 2006 to Dec 2008 he learnt various new things about mountaineering and became more experienced. From the school he was sent to Switzerland for the course in Search and Rescue in Mountains. Where he was again adjudged the Best Student. He has done six rescue operation in the mountains and has summitted almost 14 peaks including Everest twice.

Before getting a call for the Everest Expedition Col Ranveer Singh Jamwal had already created a record in the Army by leading three consecutive major mountaineering expeditions of the JAT Regt which ultimately became the first regiment in the Indian Army to do so. Col Jamwal has also done three expeditions in one year i.e. in 2010 when he summitted Mt Bandarpunch (6320M) in May 2010, Mt Bhagirathi-II (6512M) in Aug 2010 and the highest peak of African Continent, Kilimanjaro in Sep 2010. He is one of the few Indians to have such a varied experience in mountaineering with 20 peaks under his belt which includes Mt Everest (Three Times), the highest peak of the world, Mt Aconcagua, the highest peak of South American Continent and Mt Kilimanjaro, the highest peak of Africa. He is also the known mountain rescue specialist of Indian Army.