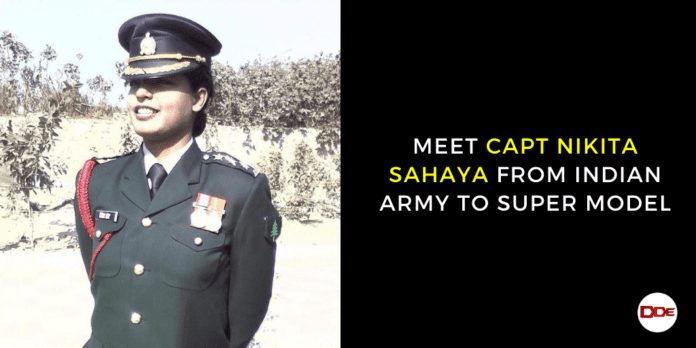 Journey of Capt Nikita Sahay from Indian Army to a super model. She was six years old when she heard the word model for the first time, courtesy a popular television show. She did not know what the profession entailed but it soon became her little dream. Born in a family of ‘conservative parents’ — her father was an officer in the Indian Air Force and mother, a teacher — it was difficult to even mention the word ‘modelling’, forget pursuing it as a full time career.

“I was a simple Kayastha Bihari girl who was supposed to do what her parents deemed best for her” she says, recollecting her early years of growing up. Sahay was the youngest among the three siblings — all girls, and would occasionally have her way of doing things she wanted to. However, when the time came to pick a career, Sahay had no choice but to pursue something that her family would approve of.

In 2010, she appeared for the UPSC Combined Defence Services Examination. She cleared the written examination with an All India Rank of 4. She took up the training and even cleared the medical fitness round. “I was asked to run 30 kilometres as part of the training. It was tiring and demanded a lot of stamina,” she says.

Life in the Indian army:

“My first posting as lieutenant was in Udhampur, Jammu and Kashmir. I was the youngest officer posted there.  As part of my job, I learned to ride trucks and horses and would command the crew and ensure that ration was provided to the troops. Transportation is the most challenging part of living in J&K and I was in charge of that.”

Capt. Sahay was thrilled when she received her first stipend of Rs 22,000. Two years later, in 2012, she got a peace posting at Meerut cantonment. “I was the only female officer in the cantonment. But here, life was much bearable and less exhausting,” she recalls.

However, Sahay says, the comfort and convenience had taken a toll on her body. “I was eating well and not working out. I had gained about 20 kilos. I weighed 80 kgs,” she says. Sahay decided that she had enough of the defence life. “I wanted to live my own life, realise my own dreams.” Much against the will and desire of her parents, in December 2012, she put in her papers. “I left my job after the Republic Day celebrations in January 2013.”

Sahay moved to Gurgaon and with all the savings she had, started a pre-school in Delhi with two of her friends. “I felt starting a school would make my mother, a teacher, happy. I felt it (education) was the second most respectable field to be in. My mother was happy too.” A few months later, Sahay realised that she was happy but wanted something else, something more.

“When I was 6 years old, I had dreamt of becoming a model. Whenever I saw Jesse Randhawa on television, my eyes would pop out. I wanted to be a model too.” This time, Sahay was persistent and decided to give it a shot.

She had no mentors or friends to help or guide her.  Besides, her parents did not approve of the decision. This time, she was not willing to listen to her parents. “In June 2014, while I was browsing Facebook, I learned about the Lakme auditions in Bangalore. I registered for it but I was not selected.

I had never walked on a ramp before. I was overweight and could barely walk the ramp.” I worked on my body and practiced walking on the ramp. I watched the top models and did my own research. I applied for the Mysore Mega Model 2014 and got selected. That was a huge boost for me.”

On July 3, 2014, she landed in Mumbai for the Lakme audition and this time, she got picked. Despite everything working for her, Sahay could not take up the offer. “The pre-school wanted my time. I went back to Gurgaon and got busy. I realised that I had wasted an opportunity.”

Even while working for the school, Nikita was waiting for the right time to pursue her modelling dream once again. She wasn’t willing to give it up so soon.

“I remembered that during the Lakme auditions in Mumbai, Carol Gracias had spotted me and said some encouraging words. She had spotted me from among 200 odd girls, so there must be something about me, I felt. That incident kept me going.”

Determined to try again, Sahay approached a photographer couple who were also her friends — Olya and Jaf in Delhi. “In October 2014, this couple suggested that I audition at Emporia mall in Vasant Kunj. At the audition Rohit Bal spotted me and referred my name to designer Manav Gangwani. I walked for Manav Gangwani and that was my first ever modelling assignment.

Since she was not working with any agency at that time, it took her some time to get to know the industry processes and network with the people who mattered. “Facebook was my biggest source for making contacts,” she says.

“I was persistent, hard working, but not desperate. That helped.”

Nikita’s modelled for leading magazines like Women’s Health, Grazia and Vogue and credits her success to her go-getter, no-nonsense attitude.

She’s walked for Amazon India Couture Week 2015 in Delhi, Lakme Fashion Week Winter/Festive Resort 2015 in Mumbai and is currently working with a prominent fashion designer in the industry.

Journey From Fat to Fit:

Training her body to shed those extra kilos and get used to the drill was equally challenging, she says. “When I was in the army I had grown lazy too. When I became a model, I realised that I can’t be so lax about my body. I went back to running and spent time doing cardio. I don’t follow a strict diet but I watch what I eat. Now I weigh 58 kilos,” she says.

Nikita Sahay says that the journey so far was never easy for her. “I have had my fair share of failures, disappointments and lonely days. I have had to take tough decisions and done so, without the support of my parents.”

She has lots of advice for aspiring models. “If you want to make it here, you should be willing to work hard. I personally feel that being intelligent also matters. The judges may ask you questions. You cannot just Google information and get away with it all the time.

You’ve got to be passionate; you must know why you want to be here and what you want to do with your life.” You don’t need to be skinny or fair or just good looking to be a model, she says. “It’s a combination of confidence, hard work and a lot of passion for the profession.”

Capt. Sahay personally admires Aishwarya Rai and Sushmita Sen because “I feel they used this platform to inspire girls like me to pursue this profession and become international icons.” “They set an example, and that’s what matters. Don’t let anyone tell you otherwise.”

Nikita Sahay feels that all of us have different potential and that if we set to utilise them optimally, we could do amazing things. “You can be yourself and at the same time make a difference to the world. I have never given up on my values or principles and will never do so. I believe in honesty and hard work.”