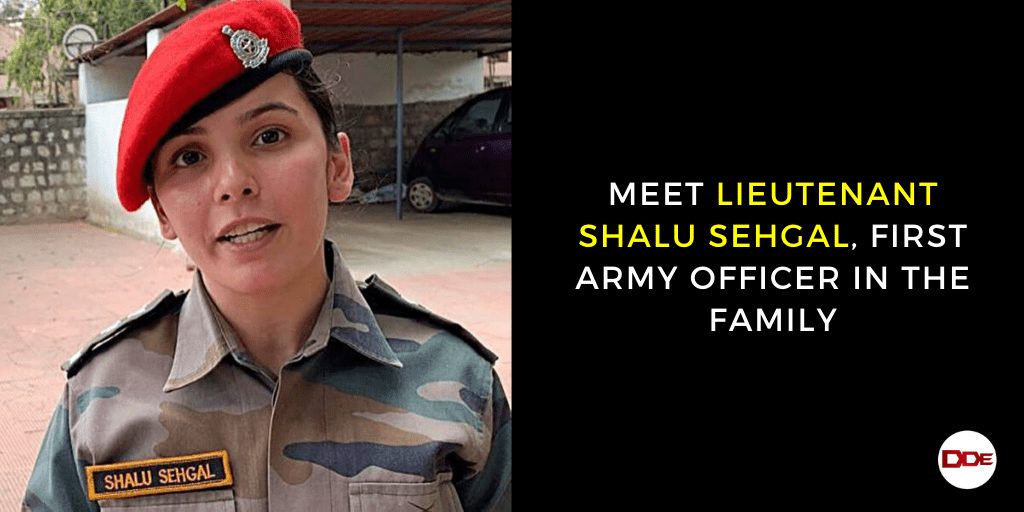 Lt Shalu Sehgal, a legal officer in the Army with the Corps of Military Police (CMP) in Bengaluru, is the first person from her family ever to have joined the Army. It was a moment of pride for Lieutenant Shalu Sehgal and her family at the passing out parade at OTA Chennai. She is the first in the family to join the armed forces. Lt Sehgal, OIC, Legal Corps of Military Police Centre and School, an LLB graduate, handles defence-related legal cases, but loves the action. “My college friends came from defence families and that’s what drew me to this career,” she says.

She underwent a rigorous 11-month training. “It made me so fit that I can now survive anywhere and under any circumstances,” she says, recollecting that her best posting was at Ladakh — at an altitude of 18,000 feet in chilling -14 degree Celsius temperature.

“Training not just makes one strong and fit, it also teaches you how to stay calm under stress, like sleeping for only 3-4 hours a day. In training and postings, there are no men and women. We are all the same, and that’s the best thing,” she said proudly.

The 28-year old admits that she loves to travel, and the Army has given her many opportunities to see places which as a civilian she couldn’t — Jammu, her first posting in 2018, then Ladakh, followed by Lucknow, and Bengaluru. Lt Sehgal wants to be a commanding officer too.

If she hadn’t joined the forces, Lt Sehgal would have gone to Australia to pursue LLM in criminology.

“I am very interested in criminal psychology. But I am very happy with my decision. In Ladakh, I was the only woman among 300 people, which is a major boost for me. In the past two years, no one has ever passed a comment on me. I have also inspired my nieces and nephews to join the armed forces,” she said. “If you are keen on adventure and mentally prepared, the Army is the right place for you,” is her advice.

Hailing from Amritsar in Punjab, the young officer, however, becomes the talk of the town every time she reaches home for vacation, with a queue of acquaintances demanding her to exhibit her physical strength. “People there often demand me to do push-ups, go on a long run, and do other exercises or activities as they feel fascinated about a woman being part of the Army.

“I have observed a positive change in several manners and etiquette followed by my other members of my family too right from my training days. It is heartening to see everyone at home starting the day early, having food on time, being punctual, and managing time and people well, as each army person is trained to do for life,” Sehgal, an LLB graduate from Panjab University in Chandigarh adds.

Born to businessman Praveen Sehgal, and homemaker Payal Sehgal, Lt. Sehgal grew up as a person who loves adventure tourism. Among several privileges that she enjoys in uniform along with her responsibilities of serving the nation, the young officer says she enjoys travelling across the nation thereby discovering new places and terrains as well as part of her work.

“While I was in Ladakh – after completing my first posting in Jammu – I was the only woman among 300 personnel posted there. This gave a major boost to my confidence proving the lessons my training taught me that there’s nothing impossible in life,” she says as her eyes glow.

Lt. Sehgal shares yet another testimony. “Not even once have I encountered anyone passing a bad comment on me, right from the days of rigorous 11-month training before getting the uniform officially,” she says.

She adds that the intensity of the training and postings, which has no gender bar, has made her self-sustainable. “While sleeping is allowed only for 3-4 hours per day, these sessions make one stay calm under stress and always with a cool head under crisis situations. Surviving alone and adjusting in any situation has been the greatest lessons the Army has taught me,” she says.

Interestingly, Lt. Sehgal was inspired by several friends and seniors from her hometown joining the forces post legal education. “As most friends of mine hailed from defence families in Chandigarh, the option of giving a try at Army recruitments came up to me. Once I started preparing for the same, there was no looking back, to date, she says.

From preliminary preparations to the passing out parade, there hasn’t been a single thought of regret for Lt. Sehgal. “Each person in the Army is kept highly motivated and high-spirited. The best memory I have to date in uniform is when I wore it for the first time – during my passing out parade,” she adds.

An advocate interested in criminology, Lt. Sehgal loves to be on the field the most. “The Army has trained me to be mentally prepared to face anything at any time for the welfare of the nation and I always ensure that I put my best forward for everything under the sun towards the glory of my nation,”.

Army Prepares to Receive the First Batch of...