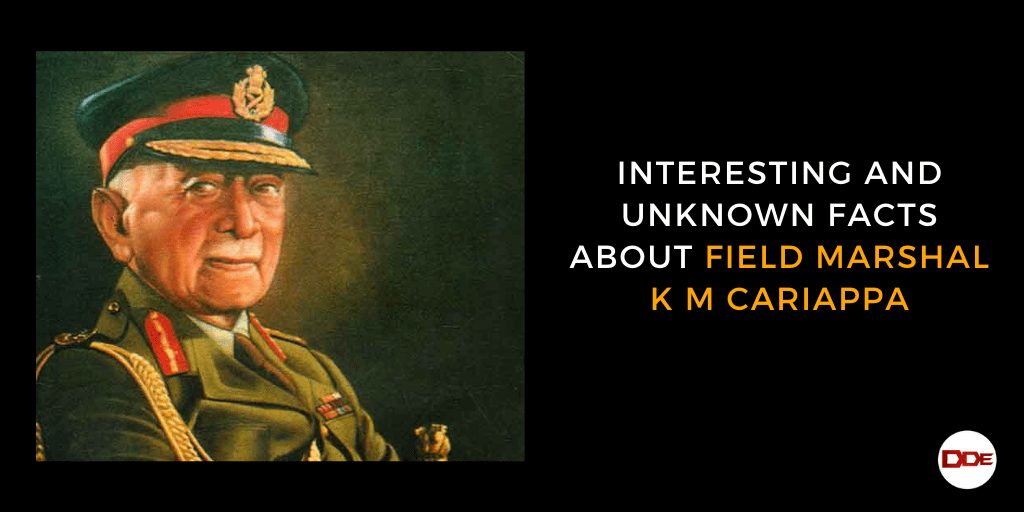 Some Interesting and Unknown Facts About Field Marshal K M Cariappa. Kodandera Madappa Cariappa has marked many firsts. The most remarkable achievement was his appointment as the first Indian Officer who took the charge of Indian Army from its British Commander in Chief, General Sir Roy Bucher. He was appointed to this position on 15th January 1949, tactfully today.

KM Cariappa received his formal education in Madikeri and college education from the Presidency College in Madras (Chennai). He was also the first Indian officer to command a unit before independence. He joined the Indian Army in 1919 CE and was commissioned in the Carnatic infantry at Bombay (Mumbai) as the Second Lieutenant. He also served in Iraq, Syria, Iran and Burma.

Cariappa was selected to the first batch of King’s Commission after the World War I in 1918 CE. He served in the second Queen Victoria’s own Rajput Light infantry. He was also the first Indian officer to undergo the course of Staff College.

Later on, he was appointed as Deputy Chief of the General Staff with the rank of Major General. Carriappa also became the Commander of Eastern Army. In 1947, war broke out with Pakistan and he was made the Command-in-Chief of Western Command.

The General Service Medal, Indian Independence Medal, Order of British Empire, Burma Star, Indian Service, Legion Merit, etc were awarded to KM Carriappa. He was the second Army General to be conferred by the honour of Field Marshal by Government of India.

To honour the first Indian Commander-in-Chief of Indian Army, India Post has issued a commemorative stamp in 1995.

Some Of The Interesting Facts: