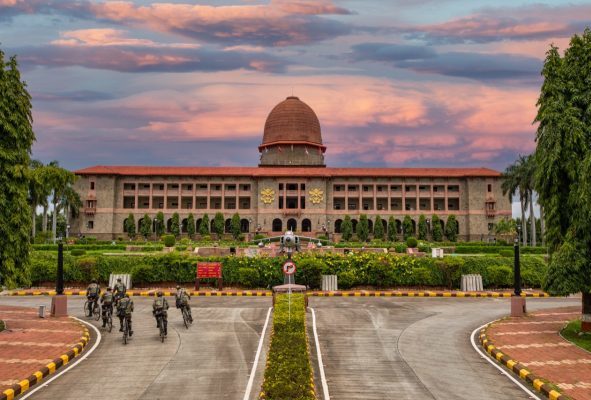 NDA Squadrons, battalions and their flags

National Defence Academy is a dream academy for many young aspirants. In general aspirants are often curious to learn more about NDA and therefore today we are going to learn about all the NDA squadrons, battalions and their flags.

When a candidate joins NDA he is called “Cadet”. Every cadet is allocated a squadron which further becomes his home for the next three years. These squadrons are similar to the houses that you used to have in your in your schools.

There are 18 squadrons in National Defence Academy and they all compete with each other throughout the year. To a cadet – The pride of squadron is well above his own. The Squadrons are named as Alpha, Bravo, Charlie, Delta, Echo, Foxtrot, Golf, Hunter, India, Juliet, Kilo, Lima, Mike, November, Oscar, Panther, Quebec and Romeo.

There are 5 battalions in NDA which are formed as following :

Each squadron has approximately 110 cadets drawn from senior as well as junior courses under training in the Academy. The squadron spirit is inculcated and nurtured through out the cadet’s stay. The prestigious Inter Squadron Championship Trophy awarded to the best squadron. Also, the champion squadron has the proud tradition of possession of the Champion banner for one term which is carried during the parade and other sports meets.

Lastly, you will hear a story of tortuous ragda from every squadron, and yet every cadet will have a forever bonding with the squadron

Every squadron has a flag kind of color combination. One half is the base or battalion color and therefore other half is the specific squadron color.