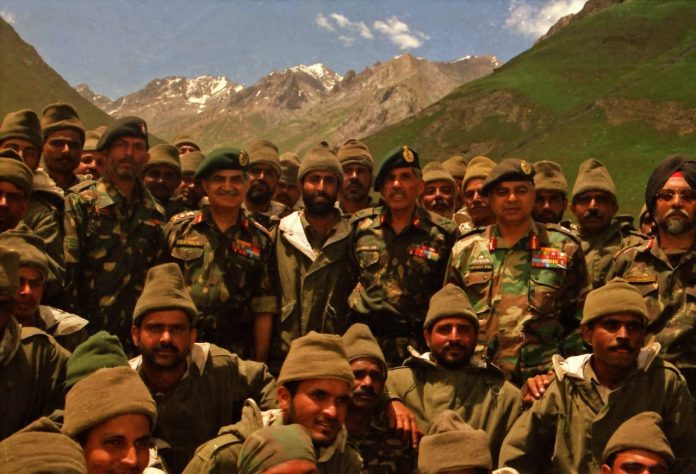 The nation is celebrating the 22nd Anniversary of Kargil Vijay Diwas today. The nation is remembering the heroes and paying tributes to the bravehearts on Kargil Vijay Diwas. The day marks the victory of Indian armed forces in Operation Vijay in 1999, when they evicted the infiltrators backed by Pakistani army from high outposts in Ladakh’s Kargil sector. The war lasted over 60 days.

As many as 527 soldiers from the Indian Armed Forces lost their lives during the war. They valiantly fought for the nation, and the Kargil Vijay Diwas not only embarks upon India’s win but also pays homage to the fallen heroes who sacrificed their lives to make ‘Operation Vijay‘ a success.

Known as the Tiger of Tiger Hill, Lieutenant Balwan Singh was responsible for the recapture of Tiger Hill. At 25, he led soldiers of the Ghatak platoon through a steep, treacherous path on 12-hour journey to reach the hilltop. The assault took the enemy by surprise as India was not expected to take such a difficult route. He planted the Indian tricolour atop the Tiger Hill and was later awarded the Mahavir Chakra for his bravery.

Later named as ‘Tiger of Drass’, Captain Vikram Batra died fighting Pakistani forces during the Kargil war in 1999 at the age of 24. He was given the highest wartime gallantry award Param Vir Chakra posthumously. Due to his exemplary feat, Captain Vikram was awarded many titles. He came to be fondly called the ‘Tiger of Drass’, the ‘Lion of Kargil’, the ‘Kargil Hero’, and so on.

Digendra Kumar’s plan had surprised General VP Malik, the then army chief, who held a Sainik Darbar in Drass on June 2, 1990 after three failed attempts to get back Tololing. Tololing is located an altitude of 15,000 feet.

Yogendra Yadav was the youngest person to ever be awarded the Param Vir Chakra. In August, 1999, Nayab Subedar Yogendra Singh Yadav was awarded Param Vir Chakra, India’s highest military decoration. His battalion captured Tololing Top on 12 June, 1999, and in the process, 2 officers, 2 junior commissioned officers, and 21 soldiers sacrificed their lives.

Manoj Pandey was a soldier of 1/11 Gorkha Rifles. According to his father, he had joined the Indian Army with the sole aim of getting a Param Vir Chakra, the highest gallantry award, which he later acquired. Gopichand Pandey, father of late Captain Manoj Pandey said that the Kargil War was one of the toughest wars in the world where the enemy has an advantage of the altitude, but Indian Army fought hard and reclaimed our peaks. “I’m proud that my son gave his life for his motherland, and became an inspiration for many.”, he said.

During the Kargil war, Sanjay Kumar was part of a column that was tasked to capture area Flat Top of Point 4875 in the Mushkoh Valley. When automatic fire from one of the enemy bunkers posed stiff opposition and stalled the column, Kumar charged at them head on.

On a routine patrol of the Bajrang Post in the Kaksar sector in the rugged, treeless mountains, Saurabh Kalia and five other soldiers were encircled by a platoon of Pakistani rangers and captured alive. No trace of the patrol was left. They were all tortured by Pakistani Army Troops for 24 days, and later their mutilated bodies were handed over by the Pakistan Army.

On 13 June, 1999, Vivek Gupta was in command of the leading Charlie Company, when 2 Rajputana Rifles launched a Battalion attack on Tololing Top in the Drass Sector. Under the inspiring leadership of Major Vivek Gupta, in spite of heavy artillery and automatic fire, he was able to close in with the enemy.

On the night of 28 June, 1999 during Operation Vijay, N Kenguruse was the Ghatak Platoon Commander during the attack on Area Black Rock in the Drass Sector. He took the responsibility of the daring commando mission of attacking a well-sited enemy machine gun position, on a cliff face, which was heavily interfering with all the approaches to the main objective of the Battalion.

The enemy pinned down the column of Lt. Keishing Clifford Nongrum with automatic fire for about two hours. In spite of all this, without seeing his personal safety, he threw grenades into it and killed six enemy soldiers. He then tried to snatch the universal machine gun from the enemy from the second position and received bullets.

India Pays Tribute To The War Heroes On...