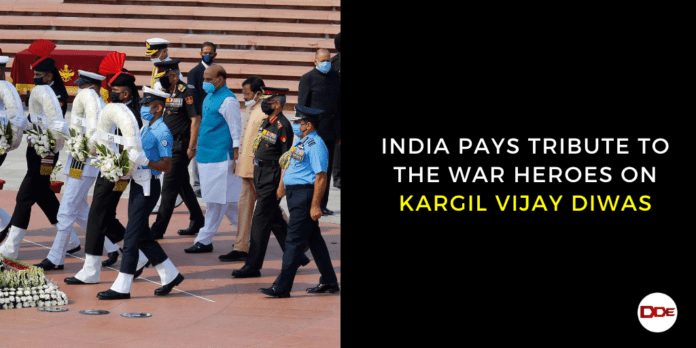 21st anniversary of the Kargil Vijay Diwas is being celebrated across the country today. The Nation is remembering its war heroes and paying tributes to Martyrs on Kargil Vijay Diwas. The day marks the victory of Indian armed forces in Operation Vijay in 1999, when they evicted the infiltrators backed by Pakistani army from high outposts in Kargil sector.

Drass War memorial has been decorated for the celebrations of 21 years of victory in 1999 Kargil War. Due to Covid 19 Pandemic the celebrations this year are scaled down in magnanimity. Usually, the celebrations run for three days starting from 24th July, have been limited to a single day.

However, several events relating to Kargil Vijay Diwas annually have already been cancelled which includes the most popular Captain Sourabh Kalia cricket Cup, due to the pandemic in the region. This year only wreath lying ceremony will take place, at Drass War Memorial.

However, the celebrations are going to be special on its own. A Senior Army officer in northern region, Lt Gen YK Joshi, a Veer Chakra awardee, was a Commanding Officer in Operation Vijay in 1999. YK Joshi himself led several assault operations, to push the enemy back from Indian territory.

The very Commanding Officer who led the Operation Vijay today attending the 21st anniversary as Chief Guest itself is a special occasion and inspiring for the forces in Ladakh region.

Vice President M Venkaiah Naidu paid tributes to the martyred heroes of the Kargil war who sacrificed their lives to safeguard the sovereignty and integrity of the country on the occasion of Kargil Vijay Diwas. In a tweet, Mr Naidu said, the grateful nation will always remember their patriotism and valour.