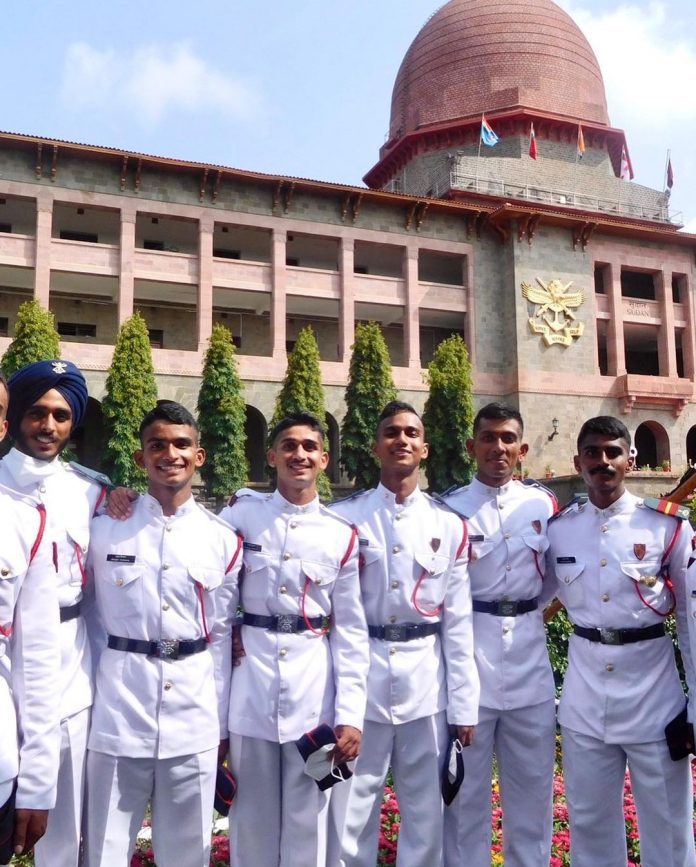 Although the conduct of the parade was modified to ensure strict adherence to all Coronavirus disease (COVID-19) protocols, the paramountcy and the grandeur of this remarkable event for the passing out cadets remained fully sacrosanct.

A total of 696 cadets participated in the parade of which 311 cadets were from the 140th course. The passing out course comprised 215 Army cadets, 44 Naval cadets and 52 Air Force cadets including 18 cadets from friendly foreign countries (Sri Lanka, Afghanistan, Vietnam, Maldives, Bhutan, Tansania, Turkmenistan, Fiji, Tajikistan and Myanmar).

Unfortunately, the parents of the passing out cadets could not be invited due to the unprecedented situations posed by COVID-19 and travel restrictions imposed across the nation. While the passing out cadets will be moved from National Defence Academy to their respective Pre-Commissioning Training Academies, the junior courses will resume their training of ensuing terms on 7th June 2021.

The Reviewing Officer conveyed his appreciation to all cadets on parade for their impeccable turnout and smart drill. He also congratulated all the cadets of passing out course, medal winners and the Champion Squadron. He expressed that NDA is a unique military academy and attracts the best youth from across the nation and friendly foreign countries. The Academy’s credo of ‘Seva Paramo Dharma’ has guided generations of officers in the three services to ‘train as we fight’ and ‘fight as we train’.

He urged the passing out cadets to carry forward the spirit of Jointmanship which is the need of the hour as the nature of warfare continues to evolve in the land, air, sea, space and cyber domains. He emphasised the importance of professional knowledge, honesty, integrity and intellectual curiosity. He complimented the parents for supporting their wards during the thick and thin of their three years of gruelling training at NDA. He also appreciated the undaunting spirit and efforts of the faculty and staff at NDA for ensuring continuity of training in the Academy despite multiple challenges imposed by the ongoing pandemic.