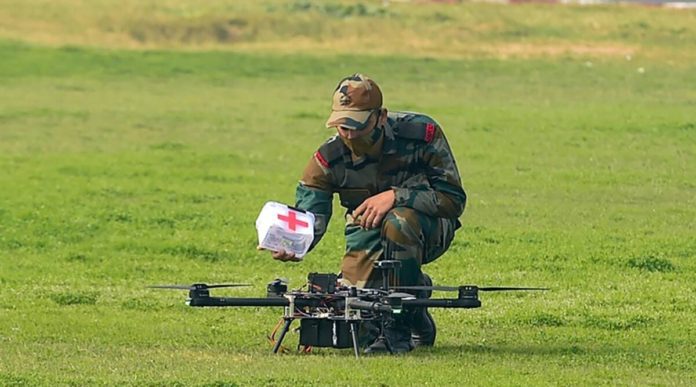 Swarm drones Indian Army Successfully demonstrated the Swarm drones Technology at the Army Day Parade in New Delhi. In the pavement of Modernization, the Indian Army Conducted the Demonstration of 75+ Small Quad Swarm Drones. The Swarm drone are Autonomously Controlled and Use Advanced Artificial Intelligence to detect Enemy targets and launch attacks on them.

The Swarm Drone demonstration included the destroying of Mock Targets like Terrorists Hideout, Enemy Signal Centre, Mortar Positions, Enemy Tanks, Helipad, and Platoon of Soldiers which were named as Tango targets. The Swarm drones were split into Mother and Child Drones. The Drones Conducted the Kamikaze Suicide Attacks on Terrorists Hideout. Other sections of Drones Conducted loitering Munition and Splinter attacks on enemy positions.

Apart from Offensive actions, the Drones also demonstrated Logistical and Medical Support to the troops posted in remote locations. The Medium-sized Quadcopter showcased the para drop of Logistics when there is no place to land for these tiny Technological heros. This group of Drones are capable of carrying a payload/Supply of 600 Kg. DRDO, PSUs, Private Sector Companies, and startups are indulged in developing these Swarm Drones.