India and France to conduct Desert Knight 21 Exercise in Pokhran 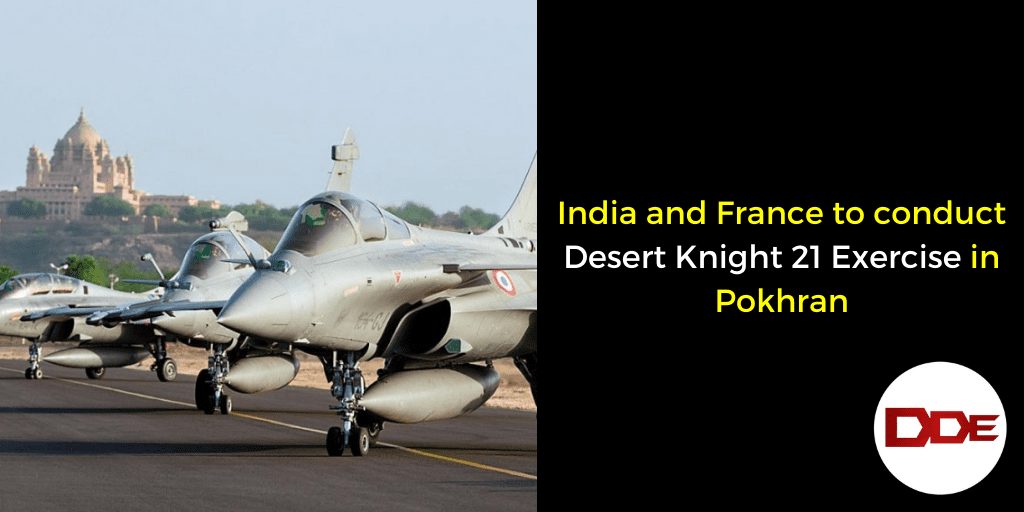 India and France to conduct Desert Knight 21 Exercise in Pokhran

Indian Air Force and French Air Force are conducting Joint Air Exercise known as Desert Knight 21 Exercise. The wargame exercise will be conducted in the Pokhran Firing Range in the Rajasthan Desert. The exercise is planned to be conducted from 20-24th of January. Air Force Station Jodhpur is hosting this Exercise.

Four Dassault Rafale jets with Mid Air Refueling Aircraft A330 have arrived in India from France for the Desert Knight 21 Exercise. The Four Dassault Rafale jets were refueled mid Air by French Tanker A330 in the Ferry from France to India. The Desert Knight 21 Exercise is completely different from the traditional Garuda Exercise which is being conducted for years.

From the Indian side, the Rafales of 17 Squadron Golden Arrows, Sukhoi 30 MKIs, Mirage 2000, and IL 78 will be participating in the Desert Knight 21 Exercise. The Joint Exercise between Indian and French Rafales along with SU 30 MKI will boost the Inter-operability between both forces. The newly inducted Rafales and Sukhoi 30 MKI will jointly exercise in Wargames to experience the joint operability of both the fighters.

The Desert Knight 21 is completely different from Garuda Exercise. Both the Air Forces will be involved in Tactical Flying, Weapons Firing, Mid Air Refueling, Formation Flying, and Complex Flying Maneuvers. The New generation Fighter jets from both the Air Forces will learn the best practices from each other.

The Newly inducted Rafales are part of 17 Squadron Golden Arrows based at Ambala and the second squadron of Rafale will be deployed at Hasimara Airbase in West Bengal. Amidst the ongoing tension at LAC, the Rafales are also deployed in that region.