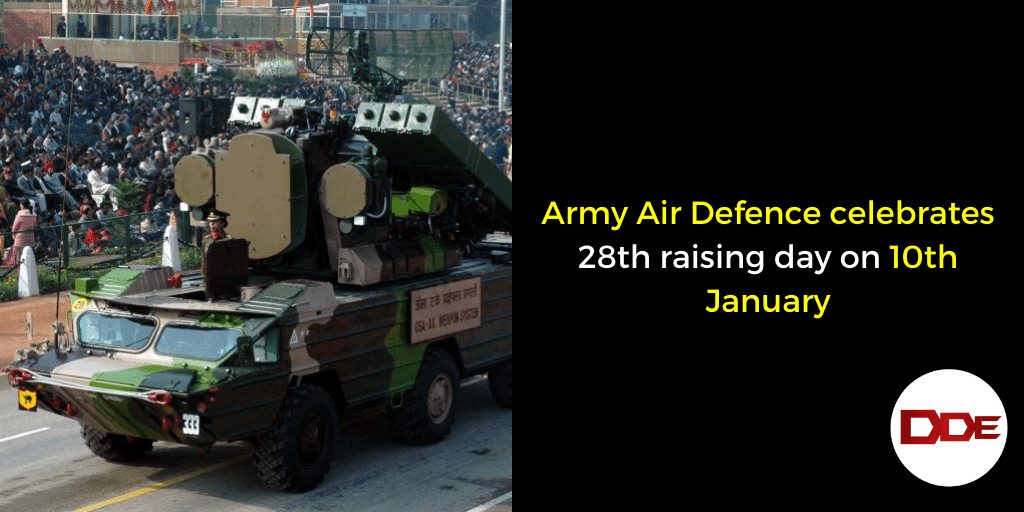 Corps of Army Air Defence celebrates its 28th raising day on 10th of January. The Corps of Air Army Defence AAD is primarily tasked to defend the Military Installations, Combat Formations and any other Indian Airspace from Enemy Air threats like Missile and Aircraft. Its headquarters is located in Gopalpur, Odisha along with Army Air Defence College.

Before the 1990s, The Corps of AAD was an integrated part of Regiment of Artillery. In the early 1990s, the Corps of AAD was split into a separate Regiment. The training of recruits/officers is conducted at Army Air Defence College which was previously known as Air Defence and Guided Missile School and Centre. The College also conducts training for personnel of Indian Navy, Indian Air Force and friendly Nations.

Army Air Defence has participated in all the battles fought by India. The motto of Corps of AAD is “Defeat the Enemy in the Sky”. The present Director-General of Corps Army Air Defence is Lieutenant General A. P. Singh, AVSM.

Akash Surface to Air Missile is indigenously developed and manufactured by DRDO, BDL, BEL, TATA, Larsen and Toubro. The Range of Missile is 18 Km. The missile is capable to take down the Enemy Fighters and Ballistics Missiles.

2K12 Kub Air Defence System is procured from the Soviet Union. The Peniye SAM Missiles are mounted Armoured Vehicle. The Missile has a range of 25 Kilometres and India operates 160 of them.

Pechora Air Defence System is Inducted from the Soviet Union. The System is equipped with highly advanced radar and V-600/V-601 Missiles. The Missiles are Mounted on the heavy terrain trucks.

9K33 Osa Air Defence System is procured from the Soviet Union. The system is integrated with Radars and Missiles. The 9M33 Short Range SAMs are mounted on Armoured Vehicles. The range of these missiles is 15 Km.

9K35 Strela Air Defence System is also inducted from the Soviet Union. The System is equipped with Radars, Control & Guidance system and Short Range 9M37 Missiles. The Missiles are mounted on Armoured Vehicles and the range is 5 Km.

K22 Tunguska Air Defence System is bought from Russia. It is a self-propelled Armoured Vehicle with Anti-aircraft gun and Missiles. It uses 9M311 Short Range Surface to Air Missiles with an Operational Range of 8 Km.

ZSU Shilka Air Defence System is also procured from the Soviet Union. It is a self-propelled Armoured Vehicle with Anti-aircraft gun and Radar Guidance. It has an Operational Range of 300 Km with a speed of 50 Kmph.

Also Read: All You Need To Know About S400 Missile Defence System