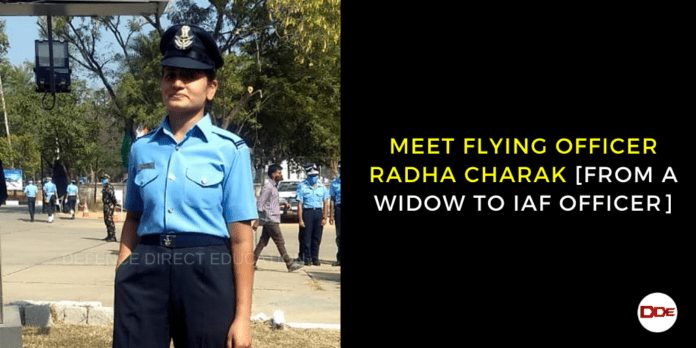 Watching his daughter, Flying Officer Radha Charak in the Combined Graduation Parade held at Air Force Academy Hyderabad on Saturday, Tarsem Singh of Jammu could not hold back his tears. It was one of his proudest moments as a father.

“Due to COVID19, we could not go to Hyderabad to attend the function and be with our daughter. Thankfully, it was telecasted live on television,” says Subedar Major Tarsem Singh Charak (Retired), a resident of Meen Charakan, Bari Brahmana, Jammu. He shows a few captures of TV he took when Radha was on the screen.

Twenty-seven years old Radha was part of the Combined Graduation Parade (CGP) held with full military splendor to mark the successful completion of Pre-Commissioning Training of Flight Cadets of various branches of IAF, where Defence Minister Rajnath Singh was the Chief Guest and Reviewing Officer.

Sub Maj Tarsem shares, “Radha always wanted to join the belt forces. She was to appear in Jammu and Kashmir Police’s Written Exam for the post of Sub Inspector in 2018. However, destiny had other plans. She lost her husband, merely two days prior to her exam.”

Her husband, Buta Singh, a Corporal in the Indian Air Force (IAF) was in Jammu in June 2018 before travelling to Andaman and Nicobar Islands, his next place of posting, when he suffered a heart attack. He died.

“He was the lone son of his parents, and a father to a little over one-year old child then. Both the families – our family and Radha’s in-laws were shattered and broken. More so, looking at the young grieving widow,” he remembers the heart rending experience.

The brave girl, still coping with the loss, decided to follow in the footsteps of her husband and join Indian Air Force, serve the nation like he would have. Donning the uniform will also probably provide solace to aching hearts, she had thought.

A lawyer by profession at Jammu and Kashmir High Court, Janipur, Jammu, she started preparing to join the IAF. Appearing for Services Selection Board as her first attempt barely three months after the tragedy struck, she failed. She worked hard and made it through in her third attempt.

“Radha, a student of Army Public School BD Bari, has been surrounded by people-in-uniform and has lived in military environment since her childhood, which got discipline, patriotism and courage ingrained in her. I knew she could do it. I just kept on motivating her,” the father swells with pride.

“She had gone for training in the first week of January 2020, and then the world witnessed COVID19 pandemic outbreak. She couldn’t even come home after her first term. Her son, now almost four years old, is staying with us,” he tells adding that she never gave up despite the challenges.

“From captaining her school’s basketball and volleyball team to joining IAF, she has come a long way. She has proved daughters are no less. She’s an inspiration to all!” Sub Maj Tarsem says.