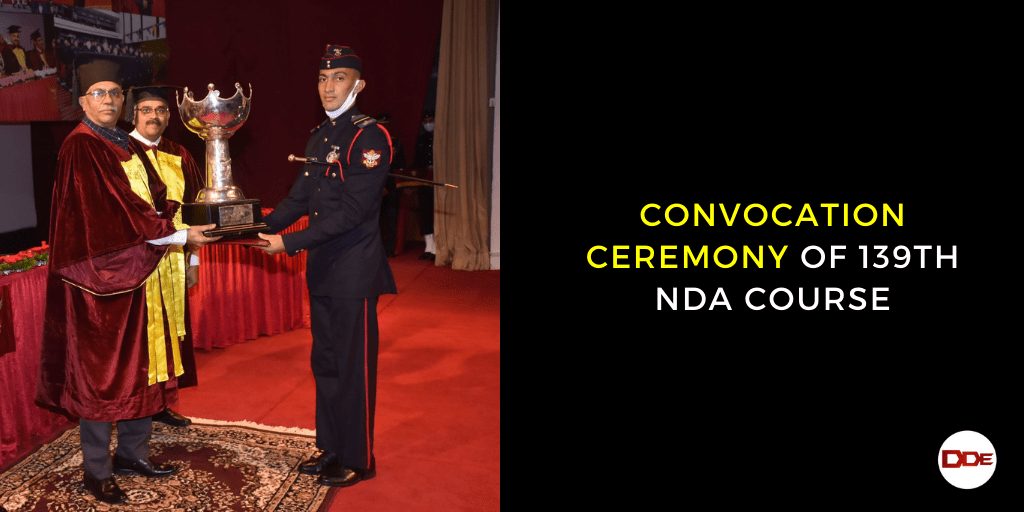 217 cadets were conferred the degree of Jawaharlal Nehru University which included 49 cadets in science stream, 113 cadets in Computer Science stream and 55 cadets in Arts stream. 12 Cadets from friendly foreign countries were also awarded degrees during the programme. In addition to this, the fourth batch of B.Tech comprising of 45 Naval cadets and 35 Air Force cadets also received course completion certificates. They would continue the fourth year of their B.tech curriculum at their respective service academy.

The Chief Guest was received by Lt. Gen. Asit Mistry, AVSM,SM,VSM, Commandant, National Defence Academy. After Commandant’s address, the academic report of Autumn Term-20 was presented by Principal, NDA Prof(Dr) O P Shukla.The Chief guest in his convocation address congratulated the cadets of the passing out course for undergoing the training with dedication and hard work. He emphasized about the role and importance of armed forces in shaping India and also motivated the future military leaders to carry forward the professionalism and ethos imbibed at the academy towards the service of the nation.

Rear Admiral Atul Anand, VSM, Deputy Commandant and Chief Instructor, presented the Vote of Thanks on conclusion of the Convocation ceremony.

The passing out parade of 139th NDA course is on 07 Nov 20 and will be aired on DD Bharati and DD Sahyadri at 0700 hours onwards. The Reviewing officer for the parade is Air Chief Marshal Rakesh Kumar Singh Bhadauria, PVSM, AVSM, VM, ADC.

25 Pictures of National Defence Academy that will give...

SSB Interview Attempts – How many times one can...

List Of Etiquette’s To Be Showcased During SSB Interview