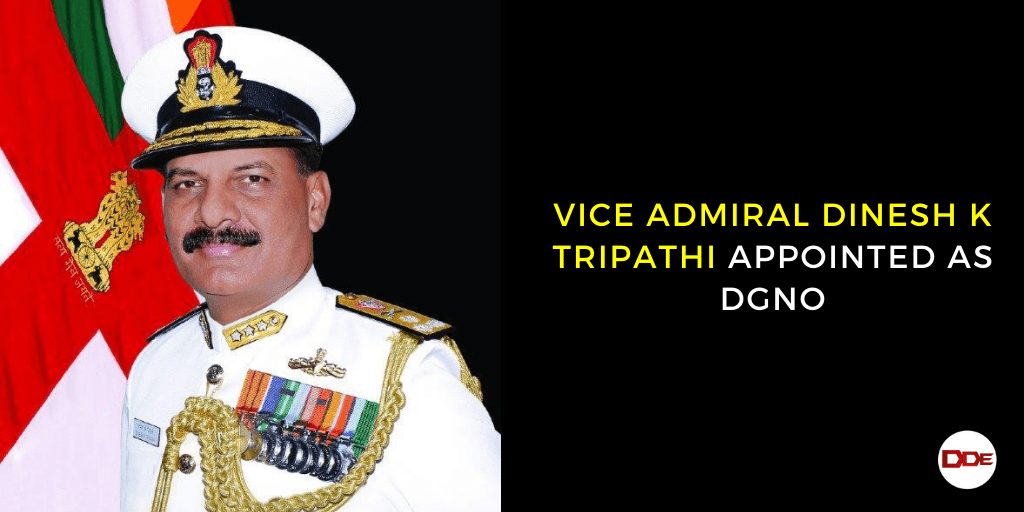 Vice Admiral Dinesh K Tripathi, AVSM, NM has assumed charge as Director General Naval Operations today, on 13 Aug 20.  He is an alumnus of National Defence Academy Khadakwasla and was commissioned in the Navy on 01 Jul 85.

A graduate of Defence Services Staff College, Wellington, where he was awarded the Thimmaiya Medal, Vice Admiral Dinesh K Tripathi has attended Naval Higher Command Course and Naval Command College at the US Naval War College, Newport, Rhode Island in 2007-08, where he won the Prestigious Robert E Bateman International Prize

The Flag Officer has commanded the Eastern Fleet from 15 Jan 18 to 30 Mar 19. On promotion to the rank of Vice Admiral in Jun 19, he was appointed as the Commandant of the prestigious Indian Naval Academy at Ezhimala, Kerala. The Academy was awarded the President’s Colour in Nov 19 by the Supreme Commander of the Armed Forces.

The Flag Officer is a recipient of Ati Vishisht Seva Medal and Nausena Medal for devotion to duty. He is a keen Student of International Relations, Military History, and art & science of Leadership.