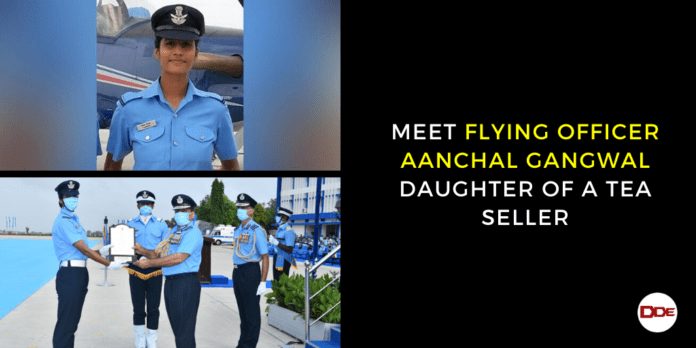 Meet Flying Officer Aanchal Gangwal daughter of a tea seller who passed out from the Air Force Academy with flying colours. She succeeded in her sixth attempt to join the academy. Aanchal who proved her mettle at the Air Force Academy in Dundigal, was awarded the President’s Plaque at the combined graduation parade on Saturday, where 123 flight cadets passed out as the commissioned officers of the Indian Air Force (IAF).

Speaking with the media, Flying Officer Aanchal recalled how her father, Suresh Gangwal, who has been running a small tea stall in Neemuch district for a long time, strived hard during his entire life to ensure that his two daughters and one son are provided with all necessary amenities. The 23-year-old said that she has always been a fighter. She said, “When I was a school kid, I had decided to be in the defence.

Today as I become an officer, it still feels surreal. It is a dream come true.” Unfortunately, due to the pandemic situation, parents of the flight cadets could not attend the passing out parade at Dundigal AFA. “I used to dream of this day almost every night. To stand in my uniform, in front of my father and mother, who have fought all the difficulties in their lives to get me here. However, due to coronavirus pandemic that could not happen.

But I am happy that they could see the ceremony on television.” She said that neither of her parents ever raised doubts about her dreams or capabilities despite being a girl. “When I told my parents that I want to be in defence, they were a little worried like any parent. But they never tried to stop me. In fact, they have always been the pillars of my life.” During the passing out parade, Air Chief Marshal RKS Bhadauria had said that this year the newly commissioned IAF officers, instead of going home for a break, would be proceeding straight to their next units to shoulder their responsibilities for the task at hand.

When asked about the same, Flying Officer Aanchal said: “I am always ready to serve my motherland and see this as an opportunity to do so.” Flying Officer Aanchal holds a graduate degree in Computer Science from Sitaram Jaju Government Girls College in Neemuch, MP and had earlier worked as a sub-inspector in the MP Police Department and a labour inspector in MP Labour Department for eight months, before joining AFA.

Meet Flying Officer Aanchal Gangwal daughter of a tea seller who passed out from the #AirForceAcademy with flying colours. She succeeded in her sixth attempt to join the academy. She also worked as a Sub Insp in the MP Police Dept & a labour insp in MP Labour Dept for 8 months. pic.twitter.com/qyNC8OPEtN

On the other hand Suresh Gangwal, father of Flying Officer Aanchal Gangwal said his daughter dreamt of joining the IAF after seeing the bravery of its personnel in helping people during the 2013 Kedarnath tragedy.

It was not easy for Anchal and the family to make her realise this dream, but she was determined, he said.

“She was a bright student and also a basketball player. She first wished to join the Air Force after seeing the IAF personnel helping people during the Kedarnath tragedy. And, now her dream has come true, the proud father said.

He said after getting inspired by the bravery of IAF personnel, his daughter collected information from bookstalls on howshe could get into the defence force and started preparations in that direction.

“She was determined and got success in the sixth attempt, he said.

But, it has not been an easy journey for her and her father, who has been selling tea for the past 25 years in Neemuch, located around 400 km from Bhopal.

“One can understand my financial condition. At times, I faced problems in depositing her school or college fee. I had to borrow money from others on many occasions to deposit the fee. Sometimes I had to pretend to be out of town to delay fees deposition, said Suresh Gangwal, who has studied till Class 10.