Saga Of Major Anuj Sood And His Wife Akriti 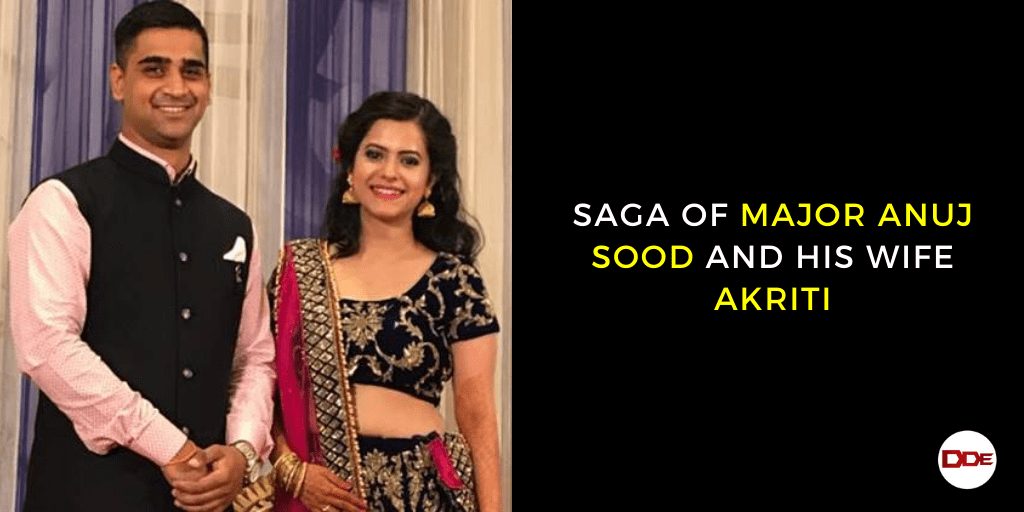 Saga Of Major Anuj Sood And His Wife Akriti

Saga Of Major Anuj Sood And His Wife Akriti. As the mortal remains of 31-year-old Major Anuj Sood were brought to his Panchkula residence Tuesday morning, his wife Akriti sat by him, sometimes overwhelmed by tears, other times looking at him intently. As she bid him a final adieu, she stood stoic and proud.

Akriti and Anuj had an understanding since the very beginning. Each time he would go out on an operation, he would text her while leaving and text her as soon as he got back. “In the meanwhile, I would refrain from texting him for at least 24 hours. I did not want his phone to ring amid an operation and give out his location,” she said.

But this time something was amiss. “He texted me Saturday noon as he left for the operation. But late evening, I felt different. I sent him so many messages. The last text I wrote, I said ‘I hope everything is okay, and I hope you have eaten something’,” she recounted, fighting back tears.

Major Anuj Sood lost his life in an eight-hour gunfight with militants in Kashmir’s Handwara Saturday. Security forces lost contact with five men including the Major who had went inside a house to flush out the militants. It was on Sunday morning that the bodies were recovered and deaths were confirmed by the Army.

The story of Anuj and Akriti began in Pune back in 2016 after their mutual friends decided to dabble in some match-making. “We were all defence services kids who were very close friends. We knew they would be good together so we decided to set them up,” their close friend Jasleen Kaur said.

The two then met at a Holi party for the first time. Even from their smattering of a conversation, Anuj already knew she was the one. “He came rushing to us and said she is the girl he would marry,” added Jasleen.

As days went by, the two got close and he finally proposed to her on the evening of May 9. As he went down on one knee with a rose amid the windmills, she gushed and said yes.

“He was posted in Pune at the time and we would hang out together with friends. But when I said yes to him, I knew it came with a condition of making a long distance relationship work.” Akriti and Anuj have lived together a maximum of six months since they started dating almost four years back. They tied the knot on September 29, 2017, at her hometown Yog in Dharamshala.

Even though Anuj has missed out on some anniversaries, he would always make sure to come for all her birthdays. “The last birthday he gathered my friends from all over the country and threw me a surprise. I did not see it coming,” Akriti recalled, smiling.

She recently quit her job and had plans to join Anuj at his next posting. Anuj was scheduled to come back home May 3. “We still have our flights booked to Pune for May 10.”

“His passion for his uniform ran deep in his veins. I was always aware of it and I always knew that if the time came, he will sacrifice himself for the country. I am extremely proud of him,” she said.

The couple last spent time together in November. “I would always wait for him to come back. I would make lists of restaurants we would visit and places we would trek to,” she said.

It was during their honeymoon at Bali that he got to know that he was to be detailed at a JC course at Mhow. They started packing as soon as they got back to Pune and he left the same day.

“He did really well there. Then he was course detailed for yet another posting. 21 Rashtriya Rifles (RR) came as a surprise in 2018 as it is a prestigious posting. He was excited and so was I. He had left soon after,” said Akriti.

Akriti’s father too was in the defence services as he took a pre-mature retirement as Marine Commander. Akriti did most of her schooling and her college in Mumbai. She had been working in Pune at an international video game company as an HR for almost four years when she quit. Her grandfather too, had retired as a Subedar from the Indian Army.

“We had instantly hit it off the day we met. He knew from day one I was the one. I don’t know anything about the future, I just want to be with him for now.”

As Anuj lay wrapped in the tricolor, she sat by him, content to be with him for the last time.