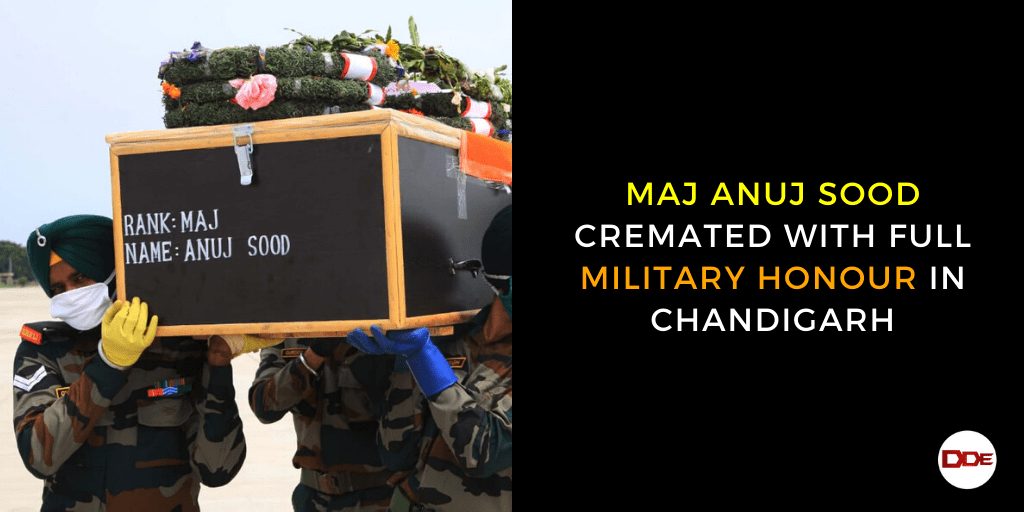 The mortal remains of Major Anuj Sood of 21 Rashtriya Rifles who was martyred in a counter insurgency operation in Handwara, were consigned to flames with full military honours.

He was among the five security forces personnel who died in an encounter while fighting the militants in Handwara area of frontier district Kupwara in Jammu and Kashmir Saturday night.

Slogans like “Vande Mataram”, “Bharat Mata Ki Jai”, “Major Anuj Amar Rahe” were raised as the Army officer’s body, wrapped in tricolour, was taken to the cremation ground at Mani Majra here from his residence in Panchkula in a bedecked Army vehicle.

Before the cremation, floral wreaths were laid on the mortal remains by many serving and retired Army officers.

Several senior Army officers and Major Sood’s family members including his wife, father, sister Harshita, who is also an Army officer, were present during the cremation.

A gun salute was given to the departed soul.

The Army officer’s funeral pyre was lit by his father.

Major Sood’s father, Brigadier Chandrakant Sood (retd), had earlier told the media that the news of the death left him shocked, but at the same time, he was proud of the supreme sacrifice the officer had made for his motherland.