10 Indian Army motivational books every aspirant should read once 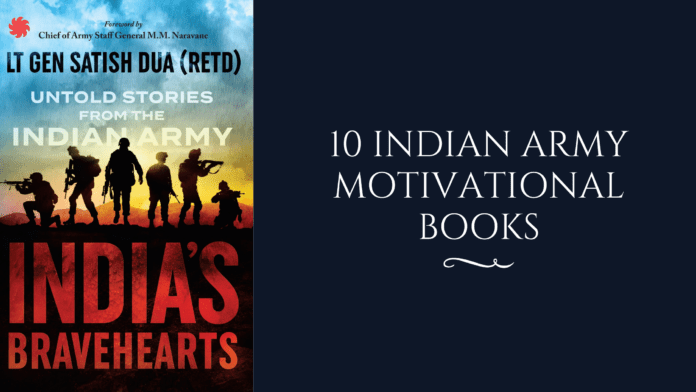 In this article we will share 10 Indian Army motivational books which you must read. Being an aspirant who wishes to join the Armed forces it’s equally important to get acquainted with the knowledge about the Armed Forces as well.

Soldiers always learn even till their last breath, and also are known to share knowledge and experience with the rookies.

In today’s blog, we are going to share with you some of the very interesting books based on true events and life stories of the Indian soldiers.

The purpose of the books is to motivate you as well as to add up to your knowledge that will be beneficial in the long run.

This could even help in your SSB Interview, you can have an upper edge with this knowledge.

The Brave comprises of 21 riveting stories from the battlefield about how India’s highest military honor was won. The stories had been made by Mrs. Rawat with great research, visiting the regiments as well as the relatives of the Braveheart on her own.

The way in which the stories are written will also surely gives you goosebumps.

2.      India’s most fearless by Shiv Aroor and Rahul Singh

Another good read these days in the genre of military motivation and stories is India’s most fearless. It is written by Shiv Aroor and Rahul Singh which simply unveils the account of valor of modern military heroes.

The book has an account of the Surgical strikes 2016, about modern heroes like Havildar Hangpang Dada, Major Mukund Varadarajan, Colonel Santosh Mahadik and many Bravehearts.

Motivation and Goosebumps guaranteed. The second book of the same series is also available now. Go for it.

It is a true account of the experiences of a former Indian Fighter pilot, who was taken as a POW during the 1971 Indo-Pak/ Bangladesh liberation war.

The book should be a must-have for aspirants opting to become a fighter pilot. The book juxtaposes the metaphor of physical battles in the sky with the conflict of minds between two nations.

4.      Kargil from surprise to victory by General VP Malik

The definitive account of the 1999 Kargil war, the strategy, the effects, the heroism all from the man in charge. The book is written by General Malik who was the General during the 1999 war, so the book is definitely going to be a good read.

The book is good for the part of how the tactics were built and strategies followed by the Indian Army that help us to win the war.

5.       Field Marshal Sam Manekshaw: The man and his times by Brig. BM Panthaki

The book is simply as a reflection on Sam, his character traits, sense of humor, moral and professional courage which make him the best leader is known in Indian Army. It is very easy to read as well, it walks through his life from a mischievous boy to Field Marshal of the Army.

Family photos, copies of citations, handwritten notes, and letters make this book a treasure to read and acquire.

6.      Four miles to Freedom: Escape from a Pakistani POW camp by Faith Johnston

It is an account of Dilip Parulkar, an Indian Air Force (IAF) Flight Lieutenant who’s plane shot down behind the enemy lines. He was taken as the POW in Pakistani camp, it describes how the ace flier manages his escape from the camp.

The book is based on the interviews with the eight IAF fighter pilots who helped in preparing the escape.

The book gives an account of India’s military history starting from the colonial era.

One of the most important aspects of Indian Armed forces changed between 1947 and 1971.

It retraces the bitter lessons learned in the 1962 and the sweet victory in 1971.

The book is easy and interesting to read basically an amalgamation of strategy, operations, tactics and human facet of war.

It is an interesting read carrying an account of the 1999 war with the perspective of the soldiers who had taken part. The book unveils the feeling of courage as well as sorrow which a soldier dealt with during the war scenario.

Moreover, it is a good read with simple language, will definitely boost you.

The book carries an account of the 26/11 attacks in Mumbai, how the attacked took place. It also unveils the joint effort of the Maharashtra police, the Marcos and the NSG commandos.

How the tactics were made and the city’s harmony was again maintained by our heroes. Easy to read and inspiring

India’s bravehearts is a rare inside account of the Indian Army by one of its most celebrated officers.

This book tells gripping stories of death-defying operations and daring surgical strikes, the intense training soldiers have to undergo to become battle-fit.

It tells us how life is really like on the LoC and the lives of the young men who made the ultimate sacrifice for their country.

Page-turning, thrilling and heart-breaking, you will see the Indian Army and our soldiers close up, like you have never seen them before.