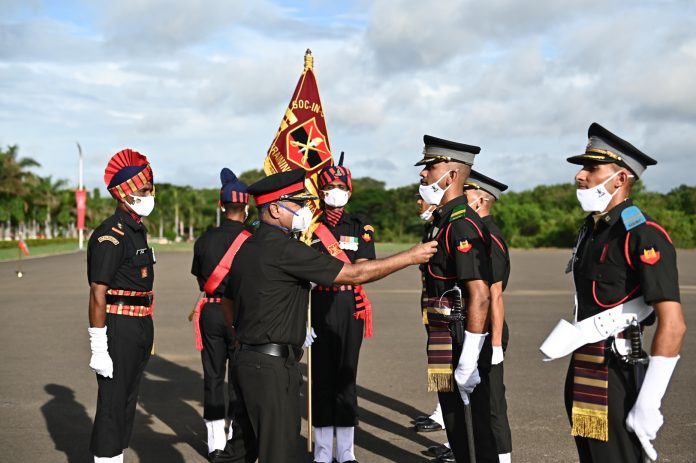 The Passing out Parade of the Cadets of the Technical Entry Scheme- 37 Course at the Cadets Training Wing, College of Military Engineering (CME) at Pune was held on Saturday. The parade was reviewed by Lt Gen PP Malhotra, VSM, Commandant CME. Thirty-three Gentlemen Cadets of the Course, including three gentlemen cadets from Bhutan and two from Sri Lanka, were commissioned as officers.

Though parents of the passing out course could not attend the ceremony owing to COVID related restrictions, the parade was streamed live on YouTube. Lt Gen PP Malhotra, VSM presented several awards to Gentlemen Cadets for excellence in training.

Addressing the parade, the General Officer congratulated the Gentlemen Cadets for their superlative performance in the training period at the wing and their immaculate parade. Lt General PP Malhotra, VSM highlighted that the cadets were at the cusp of a new beginning as young military leaders, and on their broad shoulders lay the future of our gallant Army. He urged the future officers to make their nation and the Alma Mater proud by rendering selfless and honourable service. He also stressed on imbibing strong moral values and ethics. The passing out parade was followed by a Commissioning and an oath taking ceremony for the newly commissioned officers.

College of Military Engineering has emerged as the finest technical institutions in the Indian Army. Recent forays of the College into Artificial Intelligence, Robotics and Engineering Materials have been lauded by all. The college has entered into MOU with academic and industrial majors to absorb best engineering practices and infuse a culture of innovation in the Indian Army.