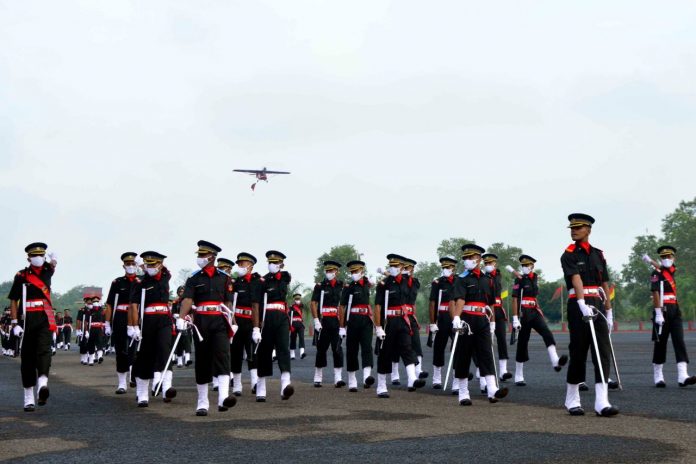 The Silver Medal for standing first in the Order of Merit amongst the passing out Special Commissioned Officers’ Course was awarded to Academy Cadet Adjutant Gurumayum Kennedy Sharma and Gurez Company was awarded the Chief of Army Staff Banner for Best Overall Performance during the Spring Term 2021.

Addressing the parade, the Commandant congratulated the Gentlemen Cadets for their excellent drill and urged the young officers to make their Nation and their Alma Mater proud by rendering selfless, dedicated and professional service. He emphasised the importance of being scholar warriors, spearheading innovative responses to myriad challenges on the battlefield so as to outthink; and outperform the adversaries. Congratulating the proud parents who were witnessing the event via live streaming, Lieutenant General G A V Reddy said that they were amongst the lucky few whose sons will get the opportunity to serve in the Armed Forces which stand amongst the best in the world.

Officers’ Training Academy, Gaya was raised on 18 July 2011 with the motto of ‘Shaurya Gyan Sankalp’ (Courage, Knowledge and Resolve). Presently, the Academy conducts training for Technical Entry Scheme (TES) and Special Commissioned Officer (SCO) entries. The Gentlemen Cadets of TES course join the Academy after completing their intermediate exams, while SCO Gentlemen Cadets are selected from the ranks.