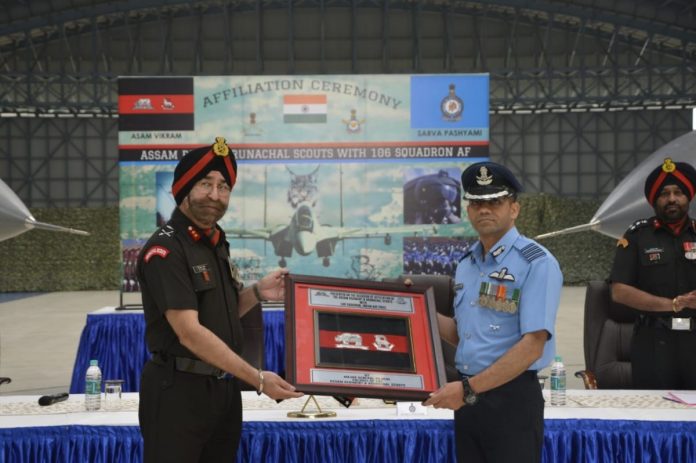 The Historic affiliation of Assam Regiment and Arunachal Scouts of Indian Army with 106 Air Force Squadron was formally signed at a solemn ceremony at Tezpur (Assam) on 15 Feb 2021. The ceremony commenced with inspection of the Guard of Honour by Maj Gen PS Behl, Colonel of The Assam Regiment & Arunachal Scouts.  Thereafter the `Charter of Affiliation’ was signed by Maj Gen PS Behl and Gp Capt Varun Slaria, Commanding Officer, 106 Squadron.

The affiliation of the Regiment with the SU-30 Squadron of Eastern Air Command will assist them in development of a mutual understanding of joint ethos, capability, limitations and core competencies of other services through a common understanding of military tactical doctrines and concepts in the contemporary conflict environment.

106 Air Force Squadron, IAF, was raised on 11 Dec 1959 and currently operates the air dominance fighter Sukhoi 30 MKI.  It is the most decorated squadron of the Indian Air Force with three Mahavir Chakras and seven Vir Chakras. The Squadron has been awarded the prestigious President’s Standard.

The contribution of the Air Force Squadron and the Assam Regiment in the 1971 War and the combined war waging efforts of the Regiment and Eastern Air Command in the Burma campaign speaks volume of their martial ardour, resoluteness and dauntless courage.

The gathering was addressed by Maj Gen PS Behl in which he spoke of the importance of affiliation and its far-reaching impact in the present day.  The General Officer highlighted that the idea behind the affiliation was aimed at a greater understanding of each other’s operational ethos, building camaraderie and espirit-de-corps. This enhanced synergy and understating of each other’s strengths will act as a ‘Force Multiplier’ within our armed forces.

Later, Maj Gen PS Behl flew a familiarisation sortie on Sukhoi 30 MKI to acquaint himself with its capabilities. The ceremony was also marked by aerobatics display by the formidable Sukhoi 30 MKI.

Also Read: How IAF MiG 21 shot down the Pakistani Patrol Aircraft over Kutch

20 Stunning and Incredible pictures of Sukhoi 30...