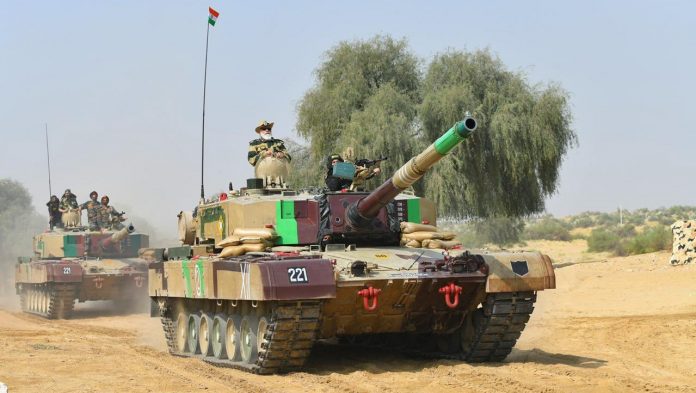 Prime Minister Narendra Modi handovers the Arjun Mk1A Main Battle Tank to Indian Army on Sunday 14th February 2021. A total of 118 Arjun MBT will be Inducted into the Armoured Corps of Indian Army. There are 124 Arjun MBT already are serving in the Indian Army.

The Cabinet Security Committee and Defence Acquisition Council cleared the deal worth 8400 crores to manufacture 118 Arjun Mk1A MBT, which will form Two Regiments of Armoured Corps. The Arjun Mk1A tanks are more Upgraded than the existing 124 Arjun tanks.

The Arjun Mk1A Main Battle Tank is indigenously designed and developed by the Combat Vehicles Research and Development Establishment (CVDRE) of DRDO. 15 Academic Institutions, private and labs of DRDO and several MSMEs have contributed to the development of Battle Tank. The Arjun Mk1A MBT will be produced by the Ordnance Factory Board’s Heavy Vehicles Factory, Avadi. The first batch of five Main Battle Tanks will be delivered to the army within two and a half years. Around 200 industries will participate in the production of Arjun MBT and will provide employment for 8000 people.

Also Read: When And Why Does Armoured Corps Celebrate Armoured Day

When And Why Does Armoured Corps Celebrate Armoured...