When And Why Does Armoured Corps Celebrate Armoured Day 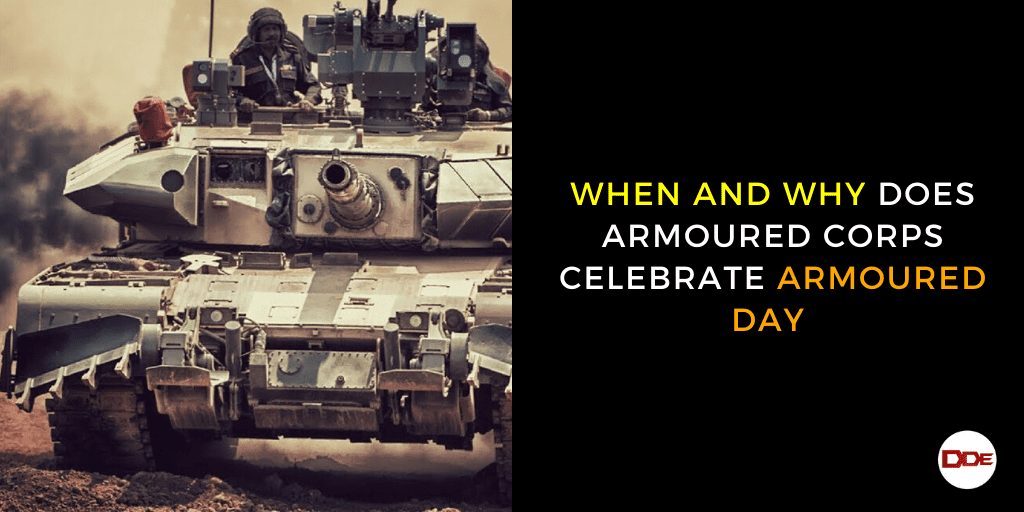 When And Why Does Armoured Corps Celebrate Armoured Day

The Armoured Corps celebrated its ‘82nd ARMOUR DAY’ on 01 May 2020.  The event commemorates the mechanization of the erstwhile Indian Cavalry on 01 May 1938, when the SCINDE HORSE became the first Indian Cavalry Regiment to stable its horses and convert to the Vickers Light Tank and Chevrolet Armoured Cars.

The elite ‘Tank’ Corps celebrated the DAY with serving & veterans officers’ fraternity of the Corps and other arms/services. The elegant function truly epitomized traditional elan, camaraderie and all – round excellence that characterizes the Armoured Corps.

‘Courage in the face of fearful odds’, has been the enduring saga of the Armoured Corps and is exemplified by the award of two Param Vir Chakras, 15 Maha Vir Chakras and 60 Vir Chakras, amongst the large number of other gallantry and distinguished service awards bestowed upon its officers and men, after independence.

The elite Arm has transited from Light Tanks / Armoured Cars in the 1930s to Stuart and Sherman tanks, Centurion heavy tanks, AMX-13 light tank in the 1950-60, the indigenous Vijayanta tank, Russian T-54/55 and PT-76 tanks in the intervening period, to is present day fleet comprising the T-72 (AJEYA) tank, the modern T-90 (BHISHMA) tank and the indigenous Main Battle Tank ARJUN.

Organized, equipped and trained to effectively accomplish assigned mission in all types of conventional operations in varied terrain, the Armoured Corps also contributes substantially to the Army’s counter insurgency effort with a large representation in the Rashtriya Rifles and Assam Rifles.

It has a standing Contingent in the UN Peace Keeping Mission in Lebanon as its representatives amidst the blue beret fraternity.

#DIDYOUKNOW ARMOUR DAY IS CELEBRATED BY THE ARMOURED CORPS OF INDIAN ARMY ON 1ST MAY EVERY YEAR TO COMMEMORATE THE COMMENCEMENT OF MECHANISATION OF THE INDIAN CAVALRY REGIMENTS. ON THIS DAY IN 1938, THE SCINDE HORSE BECAME THE FIRST REGIMENT TO SHED THEIR HORSES TO BE EQUIPPED WITH TANKS. ♥️🇮🇳⚔️ #INDIANARMY #ARMOURDAY #ARMOUREDCORPS

A post shared by DDE™ |Defence Direct Education (@defencedirecteducation) on May 1, 2020 at 5:19am PDT