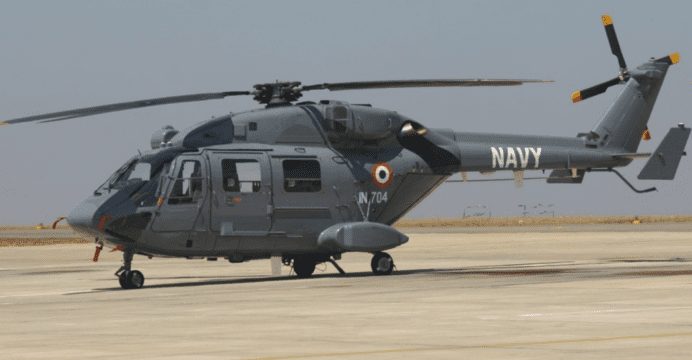 Hindustan Aeronautics Limited (HAL) has handed over three Dhruv Advanced Light Helicopters (ALH) Mk III to the Indian Navy and two ALHs to the Indian Coast Guard as part of its 16 ALHs contract during the ongoing Aero India 2021 at Air Force Station Yehalanka, Bengaluru on February 05, 2021. The helicopters were handed over by Chairman and Managing Director of HAL Shri R Madhavan to Chief of Naval Staff Admiral Karambir Singh and Director General Coast Guard Shri K Natarajan in the presence of Raksha Mantri Shri Rajnath Singh.

The ALH has clogged close to 3,00,000 cumulative flight hours and proven its mettle in versatile operations. The ALH Mk III is fitted with a state-of-the-art glass cockpit and a powerful Shakti engine. The Speed of ALH Dhruv Navy is 250 Kmph, the Range is 620 Km and the Service Ceiling is 6000 m. The Army Aviation Corps operates the many squadrons Dhruv Advanced Light Helicopters and Indian Air Force operates HAL Dhruv Squadron at Sarsawa AFS.

Also Read: MARCOS aka Marine Commandos – All You Need To Know