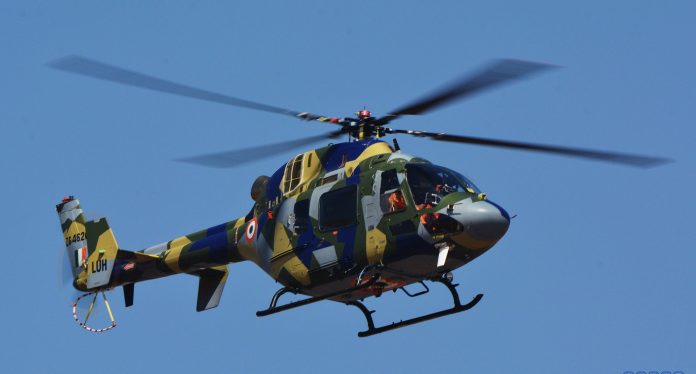 The HAL Light Utility Helicopter LUH received the Initial Operational Clearance (IOC) for the Indian Army from Centre for Military Airworthiness and Certification (CEMILAC) in the presence of Raksha Mantri Rajnath Singh during the ongoing Aero India 2021 at Air Force Station Yehalanka, Bengaluru on February 05, 2021.

Hindustan Aeronautics Limited (HAL) Chairman and Managing Director Shri R Madhavan said the thrust is being given by HAL for indigenous R&D programmes towards self-reliance and enhancing operational effectiveness of the Armed Forces.

Director (Engg. and R&D) Mr Arup Chatterjee stated that the performance of the basic helicopter in all terrains and under all weather conditions is satisfactory. HAL is currently in the phase of integrating and flight-testing mission role equipment on LUH. HAL is fully geared up to fulfil the requirements of the customers in a time-bound manner.

The HAL Light Utility Helicopter LUH is a three-ton class new generation single-engine helicopter indigenously designed and developed by Rotary Wing Research and Design Centre of HAL with features suitable for operations in the diverse operating conditions unique to India. The LUH will replace the ageing fleet of Cheetah/Chetak helicopters operated by the Services.

The LUH is powered by a single turboshaft engine Ardiden 1U from M/s. Safran Helicopter Engine (SHE), France with adequate power margins to accomplish high altitude missions in the Himalayas with ease. LUH is equipped with Smart Cockpit Display System (Glass Cockpit), state-of-the-art HUMS (Health & Usage Monitoring System) and is designed for various utility and armed roles.

Also Read: Army Aviation Corps – All You Need To Know