21 Important Questions about the Indian Navy in SSB/NSB 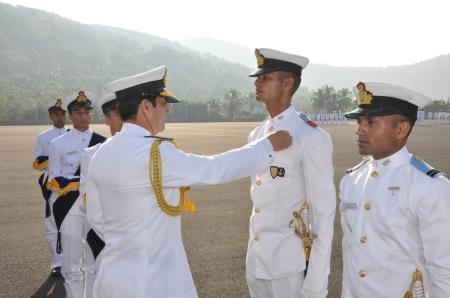 21 Important Questions about the Indian Navy in SSB/NSB

NSB Interview Questions. In the NSB, an Interview is scheduled on the 2nd, 3rd, and 4th day. The Candidate is expected to know some important things about the Indian Navy. Here are the 21 Important Questions of Indian Navy to know about:

1. Who is the present chief of the Indian Navy
A- Admiral Karambir Singh, PVSM, AVSM, ADC

2. Which is the only Aircraft Carrier presently serving in the Indian Navy?
A- INS Vikramaditya

3. Where is the Indian Naval Academy is located?
A- Ezhimala, Kerala

5. Name the Nuclear Powered Submarines serving in the Indian Navy?
A- INS Arihant and INS Chakra (on lease from Russia)

7. Name the ship involved in Mission Sagar
A- INS Kesari

8. What is the name of the indigenously built Aircraft Carrier which will be commissioned into the Navy soon?
A- INS Vikrant

9. What is the name of the Aircraft Carrier which was decommissioned recently?
A- INS Viraat

10. Where is the Submarine Training School of the Indian Navy is located?
A- INS Satavahana, Vishakapatnam

12. What is the name of the Multirole Helicopter, Navy is buying from the US?
A- Sikorsky MH-60 Romeo Helicopters

13. Name the special forces unit of the Indian Navy
A- Marcos

14. Name Operations conducted by the Indian Navy in the 1971 Indo Pak war
A- Operation Trident and Operation Phython

15. Where is Southern Naval Command is located?
A- Kochi, Kerala

16. Where is Western Naval Command is located?
A- Mumbai, Maharashtra

17. Where is Eastern Naval Command is located?
A- Vishakapatnam, Andhra Pradesh

18. The ship floats on what principle?
A- Principle of Buoyancy/Archimedes Principle

21. When is Indian Navy Day is Celebrated?
A- 4th of December

Also Read: Naval Subjects Which A Candidate Will Study At INA Ezhimala