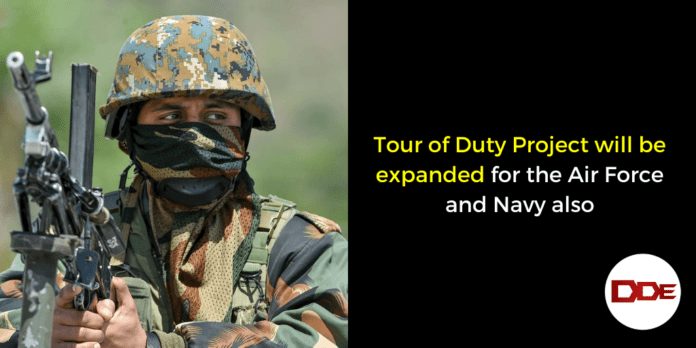 The Tour of Duty Project of Indian Army is likely to be expanded for the Air Force and Navy. The Three-year volunteer scheme of Army is still under consideration and will be implemented for Central Armed Police Forces soon.

The Tour of Duty Indian Army Project idea is currently at the discussion stage. The Scheme is in the final stage of Calculations and it is speculated that it will be implemented by the middle of Next Year. The Project is aimed to attract the Youth towards the Indian Armed Forces and will provide them a strong pavement for their future. The Tour of Duty will also reduce the burden of pension.

According to The Print, 40 percent of the strength of the Army will be recruited through the Tour of Duty Project. The Graduated candidates will be considered for officer posts and the 12th pass candidates will be considered for the Jawan post. Still, it is not sure about the written exam or Cut off percentage-based shortlisting, but the SSB Interview will be a part of the Selection Process.

The Graduated Candidates selected will be trained in Officer Training Academy, Chennai and the Jawans will be trained in respective Regimental Centers. Although the cost of training will be increased in this Project but it will provide trained, disciplined and motivated youth available for Employment. The trained officers will be sent to particular Units in peace/Field Areas. The project is seen as a move that will aim at generating large-scale employment in the Country. Mahindra group has expressed their interest in hiring the candidates who completed 3 years Tour of Duty.