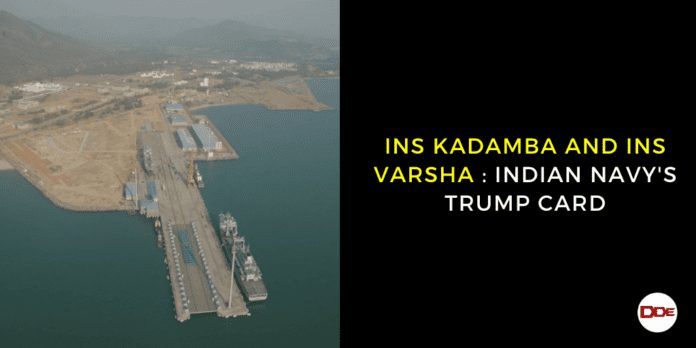 INS Kadamba is the futuristic Naval base of Indian Navy on West coast. The base is located at the Karwar in Karnataka under Project seabird. The Phase I construction of INS Kadamba is completed and Phase II is expected to be completed by 2022. The Base is developed to operate Modern Aircraft Carriers and Destroyers of Western Naval Command.

The INS Kadamba will be the key Base which has INS Hansa, Goa in the North and Southern Naval Command, Kochi in the South. The Fighter Aircrafts and support aircrafts will be operated by INS Hansa to the Aircraft Carriers. To Avoid the congestion of Shipping routes at Mumbai Dockyard, Karwar was chosen to construct INS Kadamba as an alternate option. The Phase 1 construction was completed in 2005 and Phase 2 is expected to be completed in 2022. The Base is be supported by INHS Patanjali Naval Hospital and a Naval Air Station for Helicopters and UAVs.

INS Varsha will also be a new futuristic Naval base of Indian Navy on East Coast. The Nuclear Submarines and advanced warships will be based at INS Varsha under Project Varsha. The base is located at Rambilli near Visakhapatnam. The base comes under the aegis of Eastern Naval Command of Indian Navy.

The Visakhapatnam Naval Dockyard serves for both Naval fleet and Civil shipping. The congestion in Dockyard is becoming reason for shortage of berthing space. The Phase I construction is on full swing. The Base will be supported by the Bhabha Atomic Research Centre (BARC). The Maintenance, Nuclear Engineering support and crew accommodation are the key facilities of INS Varsha.

The Base will be capable to operate 10-12 Nuclear and Diesel Electric Submarines. The other vessels of Navy like Frigates, Destroyers and Corvettes will be stationed at INS Varsha. Bhabha Atomic Research Centre (BARC) is also building a support, research and a command Centre for the base. The research Centre of BARC is located just 20 Kms away from INS Varsha.

The base will be having underground Stealth berths for Nuclear submarines to prevent  detection from enemy spy satellites and Submarine sonars. The Navy is also planning to deploy the Indigenous Aircraft Carrier INS Vikrant at INS Varsha. The Phase I of INS Varsha will be completed by 2022.

The Carrier strike group consists of an Aircraft Carrier, Destroyers, Frigates, Corvettes, Submarines and Fleet support Ships. The Multi Dimensional Warfare is carried out by the Carrier Strike Groups. Both the Naval Bases, INS Varsha and INS Kadamba are expected to operate as Command Centres for Carrier Strike groups. The Strike group of INS Vikramaditya will operate from INS Kadamba in Arabian sea and the Strike group of INS Vikrant will operate from INS Varsha in Bay of Bengal.

Both the Carrier strike groups will play key role in War time. The shipping routes in Bay of Bengal and Arabian sea will be blocked by the Strike groups, therefore cutting the logistic supports of enemies. The Both strike groups will destroy the enemy bases in minutes.

The Brahmos Missile equipped Sukhoi 30 MKI fighters of 222 Squadron (Tiger Sharks) IAF will provide the Air Dominance security for both bases. Along with that, the Marcos unit of INS Karna, Visakhapatnam will be deployed at these bases.