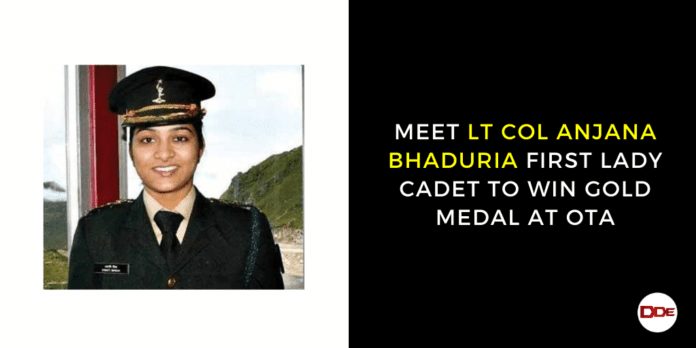 Meet Lt Col Anjana Bhaduria First Lady Cadet To Win Gold Medal At OTA  Chennai. Dubbed to be the “golden girl”, Lt Col Anjana Bhaduria, a gold medallist from the first batch of women candidates (1992), had to convince her brother even to let her go from her hometown, Chandigarh, all the way to Chennai for training. He was worried about sending a woman alone and categorically refused to let her join the services.

“I remember taking my mother aside and telling her to convince my brother before I run away from the house!” she told a portal.

The young Anjana always harboured a dream of wearing the uniform, as she had seen her father serve in the Air Force. She was working in a pharmaceutical company after completing her MSc in Microbiology when she saw a call for induction of women officers in an ad—the Women Special Entry Scheme (WSES) of the Indian Army— and she applied for it.

She was accepted in the first batch of lady cadets back in 1992 with her service number being 00001! She then went on to win the gold medal at the Officers’ Training Academy (OTA) in Chennai. She became one of the foremost lady officers to be commissioned in the Indian Army.

As luck would have it, the person who would’ve appreciated her selection the most—her father—had passed away by the time she had the opportunity to apply, but her mother was firm on backing her decision. She proved herself by topping the batch, earning the gold medal and making her family proud.

As part of the maiden batch, Anjana termed it was quite experimental as the trainers were not aware of the 25 participants’ endurance levels, they tried and tested everything.

“Initially for the rifle drill, where you are expected to carry a heavy 7.62mm rifle and complete two rounds of the ground, they handed us canes instead because they weren’t sure whether we’d be able to take it or not,” she told the portal, which the candidates refused. Later, after the batch graduated, the participants played a catalytical role in providing feedback for future batches.

As one of the foremost officers, Anjana found that jawans were not used to seeing a woman officer, and often women cadets would have to prove themselves over and over to everyone around, but it got better with time.

Her advice to aspirants is that “If you want to serve the nation, wear a uniform, lead an adventurous life, then the Army is a good fit.” She says the army teaches a youngster everything — a sort of jack of all but master of none. She said, “So if you want to pursue a career related to what you’ve studied or a specific field, the Army is not the place.” As a parting shot, she adds that “even though incidents can happen anywhere, the Army is very safe for women.”