Major Rudrashish Majumder From An Army Officer To Bollywood Actor 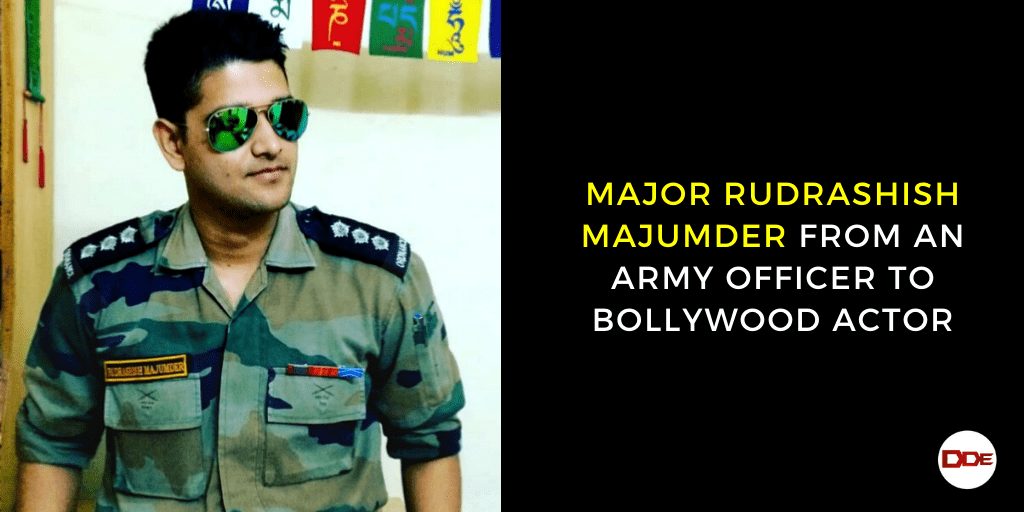 Major Rudrashish Majumder From An Army Officer To Bollywood Actor

Meet Major Rudrashish Majumder : From An Army Officer To Bollywood Actor. He is an Ex Army officer who served the nation for 7 years and is an alumni of RIMC, NDA and IMA. He is now pursuing his dream to make it big in Bollywood. He has already worked in CHHICHHORE alongside Sushant Singh Rajput and now he is in the movie JERSEY alongside Shahid Kapoor. He has also done 5 TV Commercials.

From Shells to Screens:

As a small boy in the city of joy, Rudrashish was passionate to do something for his country. Like every other kid around him, inspired by Ganguly and Sachin he thought of being a cricketer. From buying MRF labelled bats to doing bowling actions while walking alone in the streets, he was ready to take on the pitches. Life had another plans though, he got admitted into the prestigious Rashtriya Indian Military College where his young now teenaged eyes saw avenues apart from cricket. The strict military discipline and culture along with his own wish to do something for the country turned him towards a career in the armed forces. His goal was set, he knew what he wanted to do but deep down there was an artistic side to him which he had not fully yet realised. He put that artist, the actor in him to rest for a while, till he fulfilled his first wish. The wish many have but few get to fulfil.

Just like most of his fellows at the RIMC he was just cut out for the NDA the day he passed out of school. The already inculcated discipline and physical stamina helped him easily get through his 3 years at National Defence Academy and his 4th year at the IMA. Commissioned into the Army Ordnance Corp. The young boy Rudrashish Majumdar was now turned into a gentleman officer and was ready to take on the life less ordinary. The postings were not easy, but he was trained for it. He was living his life long dream to do something for the nation. He took on every challenge, every posting, every promotion and increased responsibility with ease like it came naturally to him. In middle of all the ammunition stores, supplies and gunfights, he often thought of the actor he had sitting in an armchair somewhere deep inside. After giving 7 years of his life to the service of the motherland, he finally thought of giving a chance to his second wish, his wish to be an actor.

This time the challenges were totally different than he was trained for. The first challenge he faced was his emotional dilemma of leaving his brethren in the army, the young officer who was a Major now was closely knit with his men. He was an integral part of the ethos and camaraderie that armed forces displayed. He had the trust of his men and fellow officers, he had his fellows from RIMC serving along with him and in all these years who meant more than even his own blood relations. Leaving all this behind and in to an uncharted territory was the first time that had him thinking for a action. Even the actor inside him didn’t know how to give this take in the movie of his own life. Apart from the bonds came the financial uncertainty of the profession, the thought of sustaining in the city of dreams Bombay where dreams often don’t come cheap. Being a logistics officer he did a quick math on how long he could sustain on his savings. He made the hard choice and quit the forces, ready to take on his next challenge.

He did his research and landed in Bombay and set up his base with a careful choice of apartment which cost cheap and gave him easy access to travel in the Bambai Local and the motorcycle that he bought during his serving days, for his daily hunt for a break. He used the few contacts that he got through his friends from theater and professional acting institute (KNK Acting Institute),that he had in the city to get to know about upcoming auditions he could go for. With no manager or agency and no father figure in the industry and as a complete fresher, he was not able to appear for any of them. Everyday he went for auditions and everyday he came back without performing. The actor in him though was reinforced by the soldier he was before, no failure could break his spirit. He got to know about an open audition being conducted for some roles in the movie Chhichhore by Mukesh Chhabra Casting Company (MCCC). He was selected for the role of first year student in the movie.

His talent didn’t go unnoticed in the movie and he was offered another role in a upcoming movie Jersey starring Shahid Kapoor again by MCCC. This time he had to play a cricketer which again like the challenges he overcame in the forces came naturally to him connecting him to his childhood memories of cricket in the streets of Kolkata, Cricket Association of Bengal, and his stint with the Army team helped Major Rudrashish Majumder (Retd) now who has a flourishing acting career with two movies and some ad films under his belt.

We wish him success in all the future endeavours in his life !

Yes you can have multiple passions in life, keep seeking what you love and get it !

Major Rudrashish is a perfect example of the go get it spirit of our forces. It’s all in your heart and is made of your efforts. Lets support this Real hero into becoming a Reel hero guys and show everyone that we are there to support our Major.