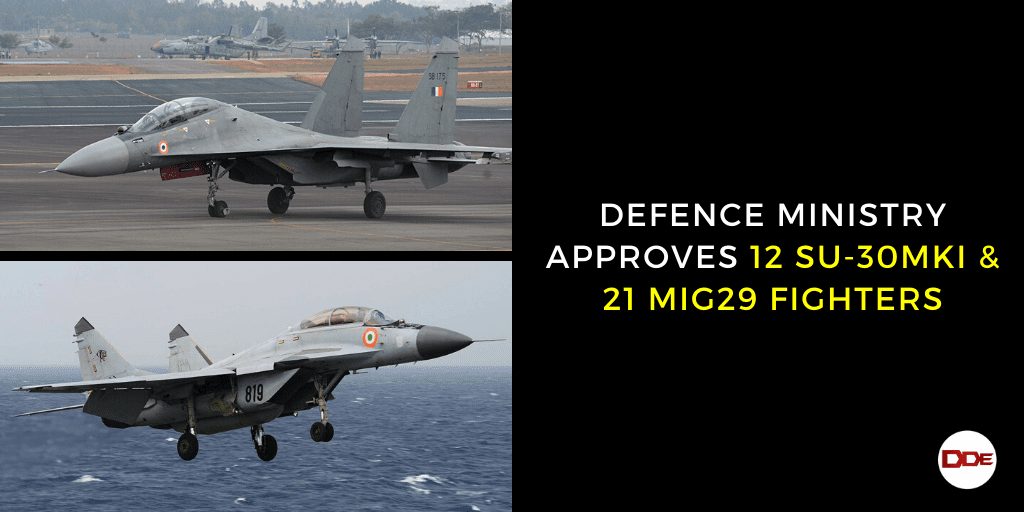 Defence Ministry approves 12 Su-30MKI and 21 Mig29 fighter aircrafts for Indian Air Force and Indian Navy. In the current situation and the need to strengthen the Armed Forces for the defence of our borders and in line with Prime Minister Shri Narendra Modi’s clarion call for ‘Atmanirbhar Bharat’, Defence Acquisition Council (DAC) in its meeting of today held under the chairmanship of Raksha Mantri Shri Rajnath Singh accorded approval for capital acquisition of various platforms and equipment required by the Indian Armed Forces. Proposals for an approximate cost of Rs 38,900 crore were approved.

Focused on indigenous design and development these approvals include acquisitions from Indian industry of Rs 31,130 crore. The equipment are going to be manufactured in India involving Indian defence industry with participation of several MSMEs as prime tier vendors. The indigenous content in some of these projects is up to 80 per cent of the project cost. A large number of these projects have been made possible due to Transfer of Technology (ToT) by Defence Research and Development Organisation (DRDO) to the indigenous industry. These include Pinaka ammunitions, BMP armament upgrades and software defined radios for the Indian Army, Long Range Land Attack Cruise Missile Systems and Astra Missiles for the Indian Navy and Indian Air Force (IAF). The cost of these design and development proposals is in the range of Rs 20,400 crore.

Acquisition of new/additional missile systems will add to the fire power of three Services. While acquisition of Pinaka missile systems will enable raising additional regiments over and above the ones already inducted, addition of Long Range Land Attack Missile Systems having a firing range of 1,000 kilometres to the existing arsenal will bolster the attack capabilities of the Navy and the Air Force. Similarly induction of Astra Missiles having Beyond Visual Range capability will serve as a force multiplier and immensely add to the strike capability of the Navy and Air Force.

Further, addressing the long felt need of the IAF to increase its fighter squadrons, the DAC also approved the proposal for procurement of 21 MIG-29 along with upgradation of existing 59 MIG-29 aircraft and procurement of 12 Su-30 MKI aircraft. While the MIG 29 procurement and upgradation from Russia is estimated to cost Rs 7,418 crore, the Su-30 MKI will be procured from Hindustan Aeronautics Limited (HAL) at an estimated cost of Rs 10,730 crore.

Share
Facebook
Twitter
WhatsApp
Telegram
Previous article
How To Answer Why Do You Want To Join The Defence Forces?
Next article
PM Modi Visits Ladakh To Boost Morale Of Indian Army