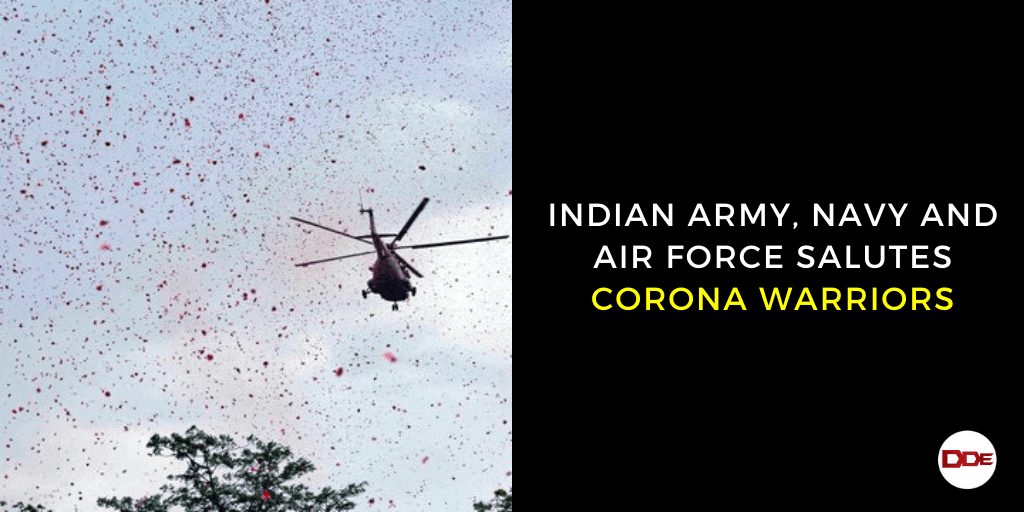 Indian Army, Navy And Air Force Salutes Corona Warriors. The Armed Forces organised several activities to express gratitude to the Corona Warriors who are battling against the pandemic. The frontline warriors did a commendable work in strengthening the morale of all those involved in India’s fight against COVID-19. Along with Indian Army and Indian Air Force, Indian Navy joined the entire nation to express gratitude and salute the Corona Warriors on Sunday 03 May 20. Expressing gratitude and appreciation of the entire nation – while representing the Indian Armed Forces – towards the determination and committed efforts of our Corona Warriors –  the medical professionals, health workers, policemen, government staff and media, for their relentless efforts against CoViD19 on 03 May 20 through a number of activities on ground, in air and on water.

Appreciation to the Corona Warriors : Station Commanders & Senior Naval Officers across the three Commands (Western, Southern and Eastern Naval Commands) and in Andaman and Nicobar Command met the Health Care professionals, policemen, sanitation workers and other frontline Corona Warriors  to  convey the appreciation on behalf of the Indian Navy and applauded their efforts in successfully treating the COVID 19 patients and also thanked for their relentless efforts.

Naval Band : Earlier in the day, the SNC band played some famous numbers on a warship berthed opposite the Cochin Shipyard Limited (CSL) and near the Vikrant-Venduruthy Bridge, epochal landmarks of Kochi. Naval Bands also performed onboard Ex-Viraat in Mumbai and in Visakhapatnam Harbour.

Kochi : As part of the Thanksgiving gesture, Chetak helicopter of the Navy showered flower petals on the District Hospital in Kochi. Subsequently, 07 aircraft flypast consisting of 02 Dornier aircraft, 01 SeaKing helicopter, 02 Advanced Light Helicopter (ALH) and 02 Chetak helicopters of Indian Navy was conducted over the city’s renowned landmark, Marine Drive which was immediately followed by steampast by 07 Fast Interceptor Crafts of the Navy, in the channel, displaying a banner thanking the Corona Warriors.

Goa : Indian Navy Chetak helicopter carried out flypast with showering of petals over Goa Medical College and E.S.I Hospital (along with the Indian Coast Guard Helps).

Andaman & Nicobar Islands : Indian Naval aviation assets carried out fly past along with the Air Force and Coast Guard across various parts of Andaman and Nicobar Islands.

Eastern Naval Command : INS Jalashwa  and INS Savitri on their Mission Based Deployments saluted the Corona Warriors for their relentless fight against the COVID pandemic while at sea

Western Naval Command : Indian Navy personnel in Arabian Sea onboard Mission Deployed ships expressed their appreciation and thanked the Corona Warriors for their unwavering commitment in the fight against corona.

Indian Navy personnel on board INS Vikramaditya off Karwar expressed their appreciation by forming a Human Word Chain in thanking the Corona Warriors.

Southern Naval Command : Steampast by 07 Fast Interceptor Crafts of the Navy, in the channel, in Kochi displaying a banner thanking the Corona Warriors.

Illumination of Ships at Anchorage : The day’s events culminated with 25 Indian Naval warships across nine port cities including those in Andaman & Nicobar Islands carryied out illumination along with firing of flares and sounding of sirens from 7:30 PM onwards.