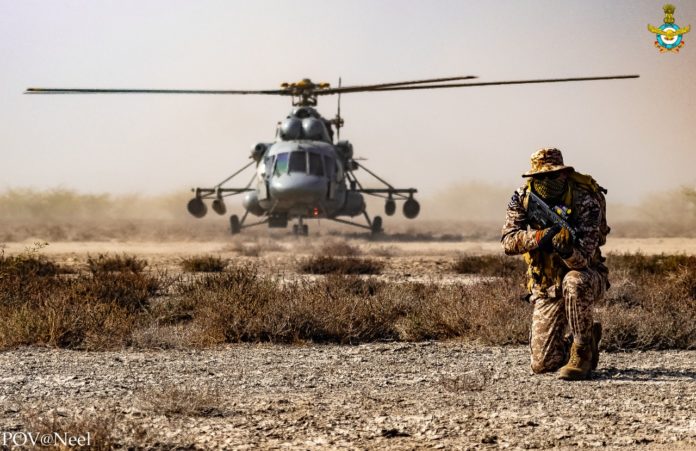 Having proven their mettle in the counter-terrorism operations in the Kashmir valley and air base security, the Garud Special Forces of the Indian Air Force have been deployed in high-altitude positions along the China border for specialist operations on the Line of Actual Control since May 2020.

Using their Special Forces in these operations, the Indian Air Force has also equipped them with the latest weapons like the American Sig Sauer assault rifles along with the latest AK-103 whose latest version AK-203 would be produced in the country under the Make in India scheme.

“The Garud Special Forces are deployed in the frontline areas along the China border from Eastern Ladakh to Sikkim and Arunachal Pradesh where they would be carrying out specialist operations in case there is any requirement,” IAF officials said.

The deployment of these troops on the LAC has been there since 2020 soon after the Indian Air Force deployed itself in an aggressive manner to counter the Chinese aggression in the region.

Garud Regimental Training Centre showcased the new weapons and equipment being provided by the Air Force to its Garud commandos.

“The latest weapons like Sig Sauer, AK-series assault rifles along with the Israeli Tavor rifles and their different variants,” the officials said.

The troops also have the Negev light machine guns along with the Galil sniper rifles which can take out enemy troops from a range of 800-1000 metres.

The Garuds used the Negev LMG in the famous Rakht Hajin operations in Jammu and Kashmir where five terrorists were killed by the Garud team and Corporal Jyoti Prakash Nirala was awarded the Ashok Chakra posthumously.

How the Garud were raised?

After the major attacks by the terrorist in the Air Force base in Jammu and Kashmir in 2001, there felt a need to raise a special force.

In September 2003, the Govt. of India authorized 1080 strong force to be trained like the Para commandos and the Marcos.

The Garuds were first unveiled on 6th February 2004, when the first batch of 62 “Air Commandos” passed out training in New Delhi.