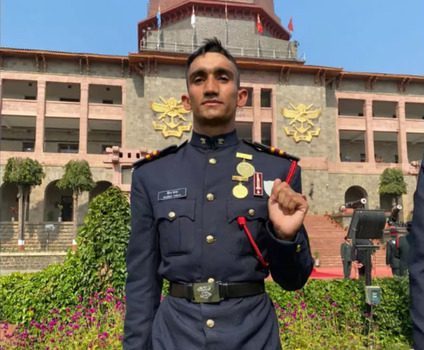 The farmer’s son from Alwar, Rajasthan, Gaurav Yadav, succeeded in the challenging IIT admission exam, but he had his sights set on something else.

He did not inform his parents that he cracked the IIT exam, and instead, worked to get through the National Defence Academy (NDA) exam.

The NDA examination is a gateway for youngsters looking to join the Indian Army, Navy and Air Force. After clearing the test, the candidates go through the SSB  interview and medical examinations. Training at NDA lasts three years.

Yadav was awarded the President’s Gold Medal at the NDA’s Passing Out Parade on Wednesday. In addition, he also commanded the parade, an honour he never thought he would get.

While Gaurav had cleared the NDA entrance exams twice, he couldn’t clear the Services Selection Board (SSB) interview. This posed quite a challenge to him, but staying determined through it all, he cracked it on the third attempt. Gaurav said that he struggled to cope with the Academy’s training schedule and had to keep pushing himself through it all. Gaurav often stood in front of the wall and practised interview sessions by responding to imaginative queries.

His brother, who is the army, said he became concerned about his mental health but is now proud of his “extraordinary feat. It is a glorious beginning for his military career.

“We were confident about his success and never stopped him from doing what he loved,” they said.

The NDA passing out parade for the 143rd course took place at Khetrapal Parade Ground in Khadakwasla in Pune.

Chief of Naval Staff Admiral R Hari Kumar reviewed the parade. During his address Admiral said, “You will now be part of something bigger, be the Best Every Day Every Time. Go forth & make the Nation Proud”.

Yadav and others cadets will now head for one more year of pre-commissioning training.

Those wanting to join the Army will train at the Indian Military Academy in Uttarakhand. For Naval and Air Force training, the cadets will head to the Indian Naval Academy in Kerala and the Air Force Academy in Telangana.

Test Your Economics Knowledge For CDS/NDA

Test Your Biology Knowledge For CDS/NDA