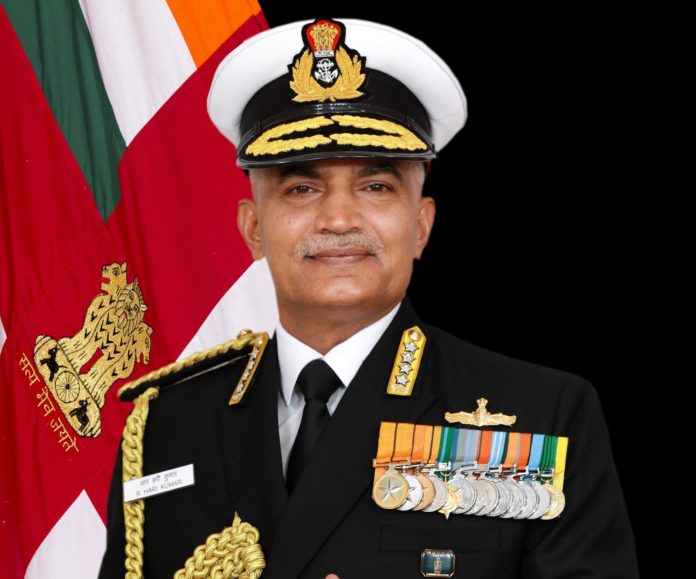 Admiral R Hari Kumar, PVSM, AVSM, VSM, ADC assumed command of the Indian Navy on 30 November 2021 as the 25th Chief of the Naval Staff. He succeeds Admiral Karambir Singh, PVSM, AVSM, ADC who retires upon superannuation, after an illustrious career, spanning over forty one years, in the Indian Navy.

Admiral R Hari Kumar is an alumnus of the prestigious National Defence Academy, Khadakwasla. He was commissioned into the Indian Navy on 01 January 1983. In his career spanning over 38 years, he has commanded Coast Guard Ship C-01, IN Ships Nishank, Kora, Ranvir and the Aircraft Carrier INS Viraat.

As a Flag Officer, he has served as Commandant of the Naval War College at Goa, Flag Officer Sea Training (FOST), Flag Officer Commanding Western Fleet (FOCWF), Chief of Staff, Western Naval Command, Controller Personnel Services and Chief of Personnel (COP) at Naval Headquarters. He has also served as the Chief of Integrated Defence Staff to The Chairman Chiefs of Staff Committee (CISC) at the critical junction during the creation of the institution of Chief of Defence Staff (CDS) and Department of Military Affairs (DMA).

He was the Flag Officer Commanding-in-Chief, Western Naval Command at Mumbai, prior taking over helm as Chief of the Naval Staff on 30 November 2021.

Our Service Chiefs And Their Indian Air Force...