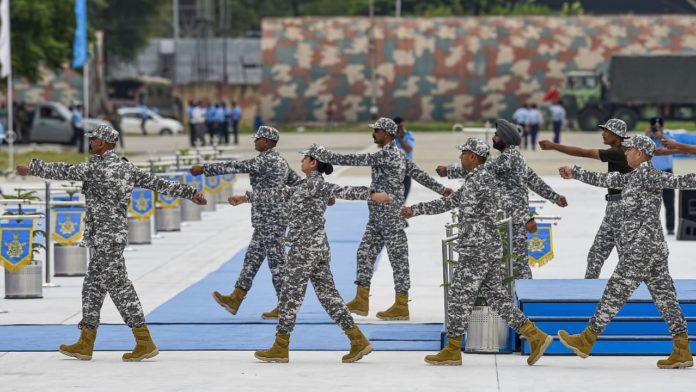 On the occasion of 90th Air Force Day, the Indian Air Force has unveiled a new pattern of combat uniform. At the event in Chandigarh, five IAF personnel including female officers dressed in the new combat uniform and marched in IAF Day parade. They were followed by two more officers who displayed the Air Force’s newly designed combat t-shirt. It is a fresh addition to the IAF uniform. The uniform was unveiled in the presence of Chief of Air Staff Air Chief Marshal VR Chaudhari on Indian Air Force Day event.

The digital patters of combat uniform has been designed keeping in mind the operational tasks of IAF. It includes new pattern of boots, a combat T-shirt, new web belt and new pattern of caps and turbans. The uniform has been designed by a standing dress committee — viewing the advancing warfare styles and is a significant and much-needed addition.

What’s new in the uniform?

A senior IAF officer who was wearing the new pattern of combat uniform said this is called a disruptive pattern and it is a terrain pattern. It is an indigenously made uniform.

“If you are undertaking an operation in hilly areas, in desert or in jungle, this pattern merges with the terrain so that we remain camouflaged while undertaking our military operations. This is very light cloth and moreover, boots are also light,” he said.

The uniform has been created keeping border tensions, modified war mechanisms and extreme weather in mind.

It is designed in a way that will help the soldier remain camouflaged.

The fabric is sturdier and is better than the previous one.

It is a versatile uniform which can be worn in several terrains.