Why the Army, Navy and the Air Force have different salutes 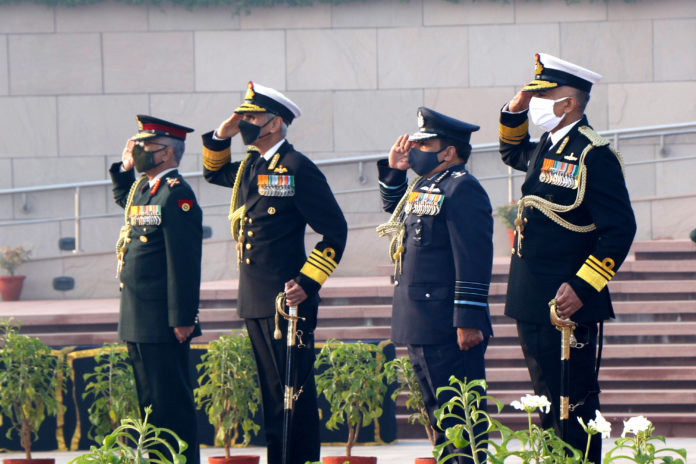 Why the Army, the Navy and the Air Force have different salutes

In today’s blog, we are going to discuss why the Army, Navy and the Air Force have a different salutes. Many of us are intrigued by seeing that the tri-forces have different salutes so lets find out the reasons.

As we all know in our day to day life the gestures play an equally important role along with vocal communication. Like if we have to pay respect to someone in India we fold both our hands to say Namaste or we touch their feet’s.

Likewise, if we talk about exchanging respect to one another in Defence force, we simply use the gesture of Salute. Salutes are primarily associated with the Armed forces but other organizations and civilians often use salutes.

In Defence they say:

“You salute the rank, not the men.”

Which simply mean that if we salute a person then simply, we are giving gratitude and respect to the rank worn by the person.

The Army, the Navy and the Air Force have different salutes, these salutes got developed with a great meaning and purpose; following is the reason behind their different salute:

In Army, a salute is usually done with palms open, facing the person we are saluting to show them that we are clean without any weapons and thus they can trust us.

The hand used for the salute is always the right hand.

In many cases, the personnel is armed, in such case, what should be done?

In such case to show a respectful gesture to the superior rank instead of salute, since they are armed, they give a tap to their weapon; this gesture is called a ‘Salami Shastra’.

An alternative of salute when the person is armed is the ‘Salami Shastra’.

In Navy, a salute is done with the Palm facing the ground.

The reason being that the hands of the sailors in the navy get dirty due to the use of grease.

And to not to show disrespect to their superior they started practicing a salute with their palm facing the ground.

Which serves the purpose of hiding their dirty greasy hands.

Earlier to 2006, the Air Force use to have the same salute as that of the Army.

The salute is usually done with the palm at 45 degrees, after the year 2006.

The purpose behind this unique gesture is to signify the rise of the Air Force.

And thus fulfill their motto “Touch the Sky with glory”, by doing so.

Hope you got the answer to the intriguing question. For more knowledge stay tuned to DDE.