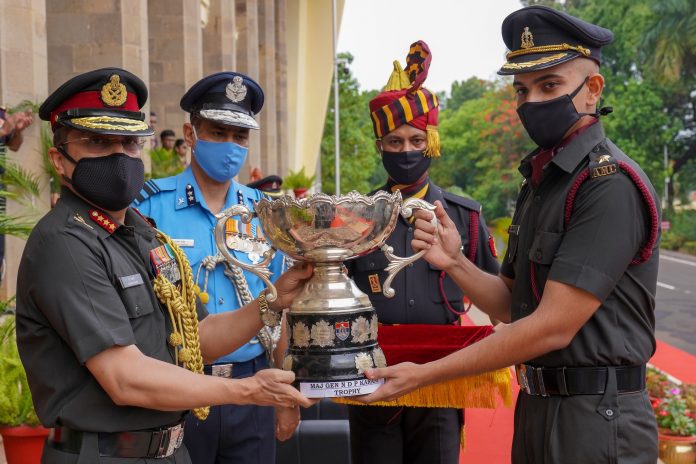 110 medical cadets, including 21 female cadets, of the 55th (C3) batch of the Armed Forces Medical College (AFMC) have been commissioned as Medical Officers into the Armed Forces Medical Services (AFMS). The Medical Cadets were commissioned by Commandant, AFMC Lt Gen Nardeep Naithani in a brief ceremony at AFMC on May 15, 2021. Ninetyfour cadets were commissioned into the Indian Army, 10 in the Indian Air Force and six in the Indian Navy. The newly commissioned medical officers were administered the oath of allegiance to the Constitution of India by Col Training, AFMC Col AK Shakya. The Passing Out Parade had to be called off for the first time since 1982, keeping in mind the Covid-19 restrictions.

In his commissioning address, Lt Gen Naithani congratulated the newly commissioned officers for joining AFMS which is the finest integrated medical organisation in the country. He complimented the parents of the students for the success of their children. He added that C3 batch has the unique distinction of having the entire batch that entered AFMC in 2016 graduating together with 100% success, which by itself is the best tribute to the teachers at AFMC. The Commandant reminded the graduating batch that they were joining the medical profession at a time when the country was passing through a difficult phase. He exhorted them to put their knowledge and skills acquired at AFMC to provide the best possible care to their patients as they join the nation’s battle against Covid-19 as COVID warriors. Lt Gen Nardeep Naithani expressed confidence that given their academic rigor and training, the newly commissioned Medical Officers would always measure up to the highest standards expected from military doctors.

The preparatory period for commissioning of this graduating batch of AFMC has been curtailed to only two weeks against four to five weeks earlier. These two weeks have been utilised completely to give intensive training to specifically prepare these young doctors to work in Covid care settings. The medical cadets have also completed the American Heart Association (AHA) certified course in Basic Life Support (BLS) and Advanced Cardiac Life Support (ACLS). The commissioned Medical Officers would be leaving immediately to join as interns in 31 AFMS hospitals across the country, which are also designated for COVID care of Armed Forces personnel as well as civilians.

Lt Gen Nardeep Naithani, who himself is a distinguished alumnus from the 17th (Q) batch of the college, also awarded trophies, medals and prizes to medical cadets for their outstanding achievements in academics and all-round performance. The President’s Gold Medal for the best all-round out graduating cadet as well as the Kalinga Trophy and the DGAFMS gold medal for best academic record during the MBBS course were awarded to Medical Cadet Vinita Reddy. Medical Cadet Suyash Singh, who was also the College Cadet Captain, received the Maj Gen NDP Karani Trophy for second best overall performance. Medical Cadet Nikita Dutta was awarded the Lt Gen Thapar Gold Medal for topping the Final MBBS examination.