Planning Of Operation Bandar And Executing The Balakot Strike 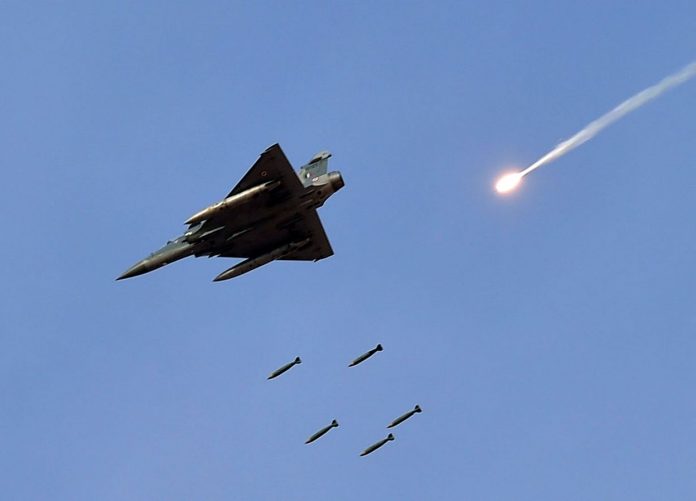 IAF’s Codename Balakot Strike Operation Bandar, the Balakot airstrike happened in the early morning hours of 26 February 2019 in retaliation to the Pulwama attack by JeM.

This is how the events unfolded including the Aircraft & Squadrons involved in Balakot Strike Operation Bandar:

This is Mirage 2000, a multi-role & a very reliable fighter with the Indian Air Force

There are two Mirage 2000 Squadrons in Gwalior under the Central Air Command.

While No.1 Sqn (which is also the oldest IAF squadron) specializes in Air superiority & Interdiction, No. 7 Sqn specializes in “Special Munitions Delivery”. At about 0200 hours on February 26, 2019, 20 fully armed Mirage 2000 fighter aircraft took off, one by one in quick succession from these two squadrons.

The aircraft mix is undisclosed but it is logical to deduce that the 12 ground attack aircraft took off from No.7 Sqn & the rest of the 8 Mirage 2000s with aerial combat loadout took of from No 1. Sqn.

The Indian air force operates 6 of these aircraft from No. 78 Squadron (Nicknamed: Battle-cry) based in Agra.

These mammoth aircraft can refuel fighter aircraft mid-air at the rate of 500-600 litres a minute & can ferry up to 118 tonnes of fuel. IL-78 can simultaneously fill three Mirage 2000, allowing the fighters to carry more payload and penetrate deep into the enemy territories.

The 20 Mirage 2000s, after taking off from Gwalior, flew towards Bareilly, near Agra where 2 of the IL-78 were already airborne & waiting. They linked up with the tanker aircraft, refuelled mid-air, then headed towards Jammu and Kashmir.

The Mirage 2000 fighters, were flying in the cover of mountains to escape a Pakistani SAAB Airborne Warning and Control aircraft (see pic below) which can detect targets at ranges up to 450 km.

But the attack was not just about to happen.

Enters the Su-30MKI, the backbone of the Indian Air Force.
Su-30MKI Multi Role Fighter Aircraft
4 Sukhoi-30 MKI fighters took off in the capacity of Combat Air Patrol. Although the mix is not disclosed it is known that the aircraft took off from one or two of these 4 squadrons:

To counter any retaliation from PAF fighters, as a safety net, IAF positioned Su-30MKI flying as Combat Air Patrols (CAPs) in our own territory.

Before the attack, IAF radars intercepted two F-16s getting air-borne which could jeopardize the mission.

This is SEPECAT Jaguar, the primary ground attack aircraft of the IAF.

In an attempt to misguide the PAF F-16s & remove them from the Balakot region, IAF launched 4 (some sources say 6) Jaguars from either

These Jaguars linked up with 2 Su-30MKI on Combat Air Patrol, & made a high speed run south towards Bhawalpur, Pakistan as decoys. It painted a picture to the Pakistani F-16s that this strike package was about to attack Bhawalpur which sounded convincing to them as the city also houses a huge JeM camp which can be a potential target of the IAF.

Both F-16s took the bait, broke the pattern and followed at high speed southwards to stop the Jaguars. But the 4 Jaguars & 2 Su-30MKIs never crossed the LOC there & hence couldn’t be engaged. The decoy worked very well.

Meanwhile, while the Pakistani F-16s are away near Bhawalpur, at about 0345 hours, the Mirage 2000 fighters crossed LOC & headed to the north of Srinagar in a 270 direction towards a pre-determined target near Balakot. They took a longer route to the Muzzaffarbad region, to avoid congested airspace & Pakistani radar pockets.

Out of the Initial 20 Mirage 2000, 16 crossed the LOC, 12 with SPICE air to ground precision-guided bombs & 4 as escort fighters equipped with Mica RF and IR air-to-air missiles to protect the strike fighters in case of contingency. All 12 Mirage 2000 dropped the laser-guided bombs & levelled the JeM base camp to dirt.

The rest of the 4 Mirage 2000 of the 20 fighters, stayed back until the other 12 aircraft made their way back into Indian airspace, lest Pakistan fighters engaged. At 0406 hours, all fighters returned back safely into India.

A DRDO NETRA AEW&C aircraft (see pic below) had flown from Bathinda Air Base & was airborne the entire time, tracking any movement from the Pakistani side that would pose a danger to this critical mission. These aircraft have a detection range of 250 – 375 km.

The entire ops, from the aircraft entering PoK and landing back in India, lasted 21 minutes. A full air defence alert was raised pan India, & all airbases were in full readiness to defend against any retaliation. This is how the Balakot air strike was executed with full military precision & planning. We all know what happened the next day when Wg Cdr Abhinandan’s MiG-21 shot down a Pakistani F-16 before being shot down itself by the downed enemy’s wingman.