Aero India 2021 Gets Off To A Flying Start In Bengaluru 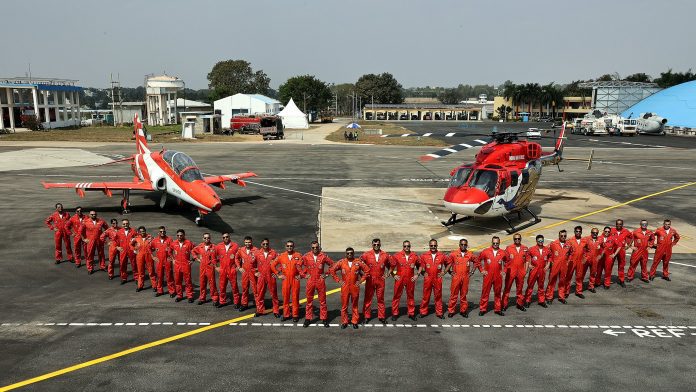 The Inaugural ceremony for Aero India 2021, Asia’s largest Aerospace and Defence Exhibition is being held at Air Force Station, Yelahanka, Bengaluru between February 03-05, 2021. This year Aero India 2021 has been organised in hybrid mode with a concurrent virtual exhibition to encourage maximum participation. Opening the proceedings Secretary (Defence Production) Shri Raj Kumar addressed the gathering and said that India has taken a leap in organising a completely COVID compliant Aero and Defence exhibition. He expressed his gratitude to ambassadors and delegates from more than 55 nations who were in attendance. Shri Raj Kumar said that the large attendance at Aero India 2021 reflects positive temperament of people across the world and renewed global interest in the capabilities of India. He said that Aero India 2021 would provide a platform for exchange of ideas and forge partnerships in the aerospace and Defence sectors. He also provided a brief about the events to be organized during Aero India 2021, including the Chief of Air Staffs Conclave, the Bandhan ceremony and the India Pavilion.

Later contract documents to produce Light Combat Aircraft Tejas were handed over by the Ministry of Defence to Hindustan Aeronautics Limited (HAL). Chairman and Managing Director, HAL Shri R Madhavan presented a model of the Light Combat Aircraft (LCA) Tejas to Raksha Mantri Shri Rajnath Singh. This was followed by the screening of a short film on the journey of the aircraft.

Addressing the gathering Raksha Mantri Shri Rajnath Singh expressed his happiness at the attendance of delegates from around the world at Aero India 2021. He said that the existing supply chains developed over the years by aerospace and engineering firms and an investor friendly government with simplified procedures and single window clearance mechanism makes Karnataka an attractive destination for industry. He expressed his gratitude to Chief Minister of Karnataka Shri B S Yediyurappa for extending full support in organising Aero India 2021.

Speaking on Aero India 2021 Shri Rajnath Singh said the exhibition would display the vast potential and the multifarious opportunities that our country offers in the field of defence and aerospace sector. He added that it promises to be the world’s first ever hybrid aero & defence exhibition with a concurrent virtual exhibition making it a truly digital and global event.

Raksha Mantri appreciated the growing optimism of the global community, reflected in the participation of over 540 exhibitors including 80 foreign companies and defence ministers, delegates, service chiefs and officials from more than 55 nations. He highlighted that the unique opportunity in defence and aerospace manufacturing that India offers through a “Sangam” of rising demand, greater innovation, conducive policies and maturing ecosystem in the sector.

Shri Rajnath Singh also announced that the government plans to spend 130 billion dollars on military modernisation over the next seven years. He said that steps had been taken to strengthen the nation’s security apparatus with domestic manufacturing and complex Defence platforms becoming the focus of the Aatmanirbhar Policy. He said that the government had enhanced Foreign Direct Investment in the Defence Sector up to 74 per cent through the automatic route and 100 per cent through the government route. Hailing the reforms brought in by the government since 2014 he said that they would create a conducive system for exports, foreign direct investment and offset discharge. The Newly introduced (Buy Global-Manufacture in India) category of capital procurement in Defence Acquisition Policy 2020 allows outright purchase of equipment from foreign vendors and indigenous manufacture through an Indian subsidiary, a joint venture or an Indian agency. He said a large number of indigenous Defence equipment had been developed by Defence Research and Development Organisation to cater to the needs of the nation’s defence forces.

Raksha Mantri informed that reforms aimed at bringing ease in doing business, have shown good results. India has jumped from 77th rank in 2019 to the 63rd rank in the World Bank’s Ease of Doing Business Rankings. He added that industrial licensing requirements have been eliminated for a number of items in the defence sector. More than 500 companies have now taken defence licences, doubling the number in the last 6 years. Shri Rajnath Singh invited business leaders from across the globe to take advantage of the various initiatives of the government of India and set up manufacturing units.

Shri Rajnath Singh said that the India pavilion at Aero India 2021 would showcase India’s design and manufacturing supply chain associated with various facets of the rotary wing system. Raksha Mantri expressed great happiness that HAL got the orders for 83 new indigenous LCA – Tejas MK1A for Indian Air Force valued at more than Rs 48,000 crore, the biggest “Make in India” defence contract till date. He said with a strong and diversified Micro, Small, Medium Enterprise sector composed of more than active 5000 units, India has the potential to become a reliable supplier of defence equipment to many of its friendly nations.

Raksha Mantri shared the vision of making India one of the biggest countries of the world in defence sector, from design to production, with active participation of public and private sector. He said that to achieve the twin goals of self-reliance and exports, we have set a target to achieve Rs 1,75,000 crore turnover, including export of Rs 35,000 crore in aerospace and defence goods and services by 2024. Shri Rajnath Singh recognised India’s interests beyond its shores and said that it was India’s duty to remain capable and willing to assist them in times of natural calamities and security challenges. He expressed happiness at the organisation of the first Indian Ocean Region’s Defence Ministers’ Conclave with the theme “Enhanced peace, Security and cooperation in the Indian Ocean Region” in this edition of Aero India. He said that this was an implementation of the concept of the Indian Ocean built around Security and Growth for All (SAGAR), visualised during Prime Minister Narendra Modi’s visit to Indian Ocean Island states in 2015.

Raksha Mantri said that India is also a victim of the global threat of state sponsored and state inflicted terrorism. He said that the nation has long witnessed attempts by other to change the status quo along our borders. He assured that India is vigilant and prepared to counter and defeat any misadventure as well as to defend its territorial integrity and its people. He said that this resolve is exhibited in India’s growing defence capabilities, which will be showcased in Aero India 2021.