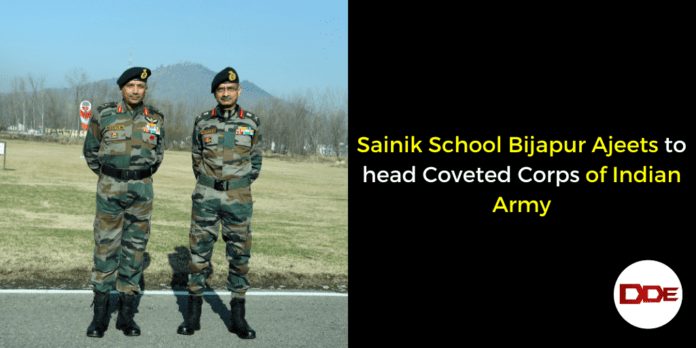 The 15 Corps aka Chinar Corps is responsible for the Operations in Kashmir Valley and maintaining peace in the Kashmir Region. The Nagrota Based 16 Corps aka White Knight Corps is responsible for the guarding of Line of Control along Pakistan Occupied Kashmir. Amidst the Heavy Cease fire Violation at LOC, the Indian Army is retaliating in a most powerful way. Lt Gen MV Suchindra Kumar, GOC, White Knight Corps visited Chinar Corps & interacted with Lt Gen B S Raju, Chinar Corps commander to coordinate Indian Army efforts in Jammu & Srinagar.

Both the General Officers are Alumnus of Sainik School which is located in Bijapur District of Karnataka. Established in 1963, Sainik School Bijapur has contributed more than 800 officers for the Indian Armed Forces. One of the five pilots who flew the Rafales to India, Wing Commander Arun Kumar is also an Alumnus of this Sainik School.

The Notable Alumnus of Sainik School SSBJ are :

Proud Moment for Sainik School Bijapur since both the coveted Corps in Jammu & Kashmir are currently commanded by their alumni. ♥️🇮🇳 @adgpi#IndianArmy #bandofbrothers pic.twitter.com/XCn2NWm5sF