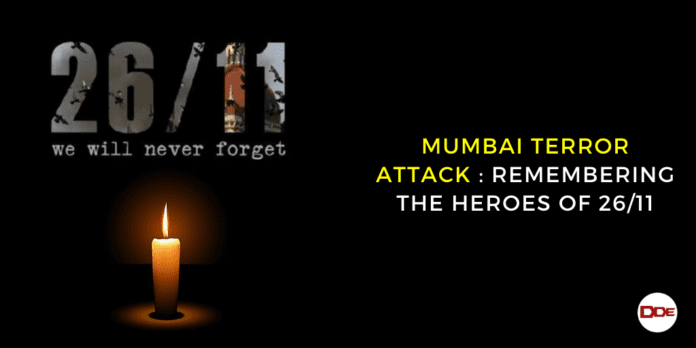 Mumbai Terror Attack : Remembering The Heroes of 26/11. The Mumbai terror attacks of 26 November 2008 left a scar on the psyche of the city, one which it has struggled to come to terms with. The 10 Pakistani terrorists who came from the sea targeted the Chhatrapati Shivaji Terminus (CST) railway station, Nariman House complex, Leopold Cafe, Taj Hotel and Tower, the Oberoi-Trident Hotel and Cama Hospital among other prime locations in South Mumbai. When the mayhem ended after three days, some 190 people were dead and hundreds of others wounded.

But amid the grief, shock, anger and horror which took over Mumbai and the rest of the country on that fateful November week 12 years ago, there were also incredible tales of raw courage, of bravery, of a sense of duty, of men who faced the terrorists’ bullets while trying to rescue others, of those who fought back against terror. Some of these brave men paid the ultimate sacrifice.

As we remember 26/11, let us also pause and remember some of these heroes.

A member of the elite special forces, Major Sandeep Unnikrishnan made the supreme sacrifice while defending fellow NSG commandos of the 51 Special Action Group and guests, and taking the fight to the terrorists inside Taj Hotel. He was killed fighting a terrorist who was armed with grenades and an AK-47 after the officer charged alone into a corridor. The ‘Black Cat’ managed to wound one terrorist and drive all the jihadis towards the restaurants below, from where there was no escape as security forces closed in. Major Unnikrishnan was posthumously awarded the Ashok Chakra.

Hemant Karkare, the chief of the Mumbai Anti-Terrorism Squad, was at his home in Dadar when he got a call about a terror attack at 9.45 pm on November 26. He immediately left for CST station accompanied with his driver and bodyguards. There he learnt that the terrorists were now near Cama hospital. Karkare together with police officers Ashok Kamte and Vijay Salaskar went on the lookout for two terrorists believed to be hiding behind a red car. Eventually, they saw one of the terrorists and managed to injure Ajmal Kasab, the only terrorist who was caught alive, but in the ensuing exchange of fire with the second terrorist in a narrow lane close to the Crime Branch office, all three police officers were killed.

A former army soldier-turned Mumbai cop, Tukaram Omble and his fellow policemen were involved in a shootout with two terrorists in a hijacked car, one of whom was killed. In an act of incredible daring, Omble held the barrel of Kasab’s gun and took dozens of bullets at point blank range. That gave the other cops time to overpower Kasab. For his supreme sacrifice, Omble was honoured with the Ashoka Chakra, the country’s highest peacetime gallantry award.

Not all heroes don uniforms. Karambir Singh Kang was the general manager of Taj Mahal Palace Hotel in 2008 when terror struck. Keeping his cool when the world around him was quite literally falling apart, he helped hundreds of guests and staff escape. Though Kang survived the attack himself, his wife and two children did not make it and were killed in a fire that engulfed the sixth floor.