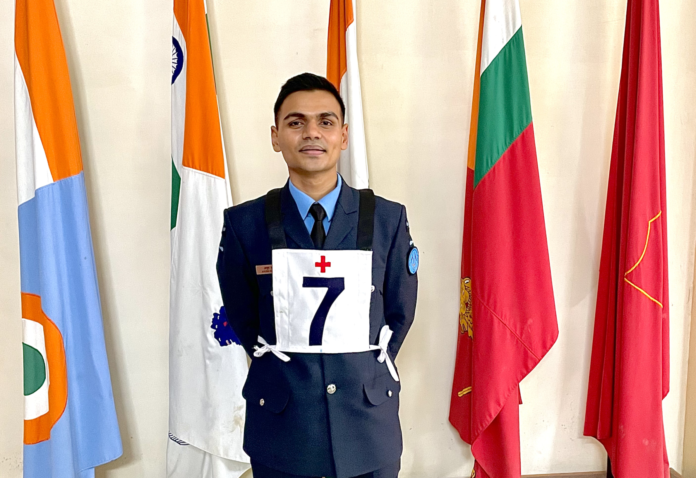 Hello aspirants, I am Ayush Pathak, recommended from 18 SSB Allahabad for INDIAN MILITARY ACADEMY in my first attempt. 5 years ago, back in 2016, I was shattered and broken. Honestly, sobbing. I felt like things were just kinda hard and i just wanted to quit to be honest. I had no one to speak my heart out. Friends betrayed me, family friends and close ones bitched a lot about me, everyone left like a passing wave. Just because of one breakdown in my 12th grade. From getting 10 CGPA in 10th grade, 90% in 11th grade to 63% in my 12th grade. I always wanted to be a fighter pilot. Always had a dream of joining NDA.I was actively playing basketball, badminton at KVS level. I was actively participating in various extra curricular activities. I was an active member of 8 KAR NCC Battalion. Everything was streamlined towards my goal.

After the results, everyone judged and made their own perception about me on the basis of my percentage. Not even a single person was interested to know the reason. After that I have appeared for NDA examination twice but couldn’t clear it. I was not eligible for TES because of my percentage. All the doors were shut to appear for SSB. I lost a lot of faith in myself and it was getting really hard to push through. I decided to apply for sports quota to join RV college of engineering, Bangalore. It brushed up the little broken pieces of heart. I got the seat in Mechanical Engineering there. Joining the best engineering college of Karnataka shutted a lot of mouths. I was not at all happy and satisfied. Deep down, I knew that this is not something i wanted. It took me a semester to sort the swirling whirlpool inside me. I was literally craving for just one SSB attempt.

I used to cry but didn’t let anyone know about it. I was known as angry military sort of a guy in my college. I researched a lot about various entries to get commissioned . I got to know about service entry to join IMA after joining Airforce as an airman .I decided not to sob anymore and not to quit on my dreams. I joined Airforce and utilized every single opportunity that i got Like being squadron senior, inter command basketball championships, debate competitions, camp briefings and what not .I was enhancing myself each passing day. Then I got selected for Republic Day Parade Contingent and i got posted to New Delhi.

This was the turning point of my life. I was focused, was preparing and I didn’t leave any stone unturned. Cleared the written examination and was eagerly waiting for my SSB attempt. I was indulged in a lot of physical activities in  my day to day regime as I was a ceremonial contingent. I was fortunate enough to be a part of the best marching contingent (INDIAN AIRFORCE) of Republic Day Parade 2020.Seeing tanks and various contingent commanders leading their contingent on Rajpath during RD 2020 made my decision concrete to join the Indian Army. Finally the day had arrived, 13th November, 2021. I was standing outside the gate of 18 SSB, Allahabad. I was emotional and touched the ground before entering the gate. I had a quick flashback of me craving for one SSB attempt and all the work that I had done. I was super energetic, confident and excited for the whole process.

After the documentation, we went back to the lines and I was allotted with Blue chest no.17. [My favourite colour and the date I had my conference]. I was getting vibes that yes this is the attempt for which I was craving from so long. I was full fledged prepared. I didn’t leave any stone unturned. I was feeling as if i have carried the 5th generation weapons and armor along with me to fight this battle. I interacted with almost of them the very first day in our candidate lines. I slept off on time and woke up with the same josh. We reported to the Psych testing hall.

TATs went really well. I felt as if the time given to write the story was more because i drew lines after each story that I have written. I have attempted all the 60 WATs. I have attempted 43 quality SRTs and written my SD well with the lines in between. I was feeling as if I was writing my English board examination. Fortunately my handwriting came out nice and it went smooth as expected. We were sent back to our candidates lines. Interviews were scheduled in different groups. My interview was scheduled the next day. I went along with my friends to have snacks and coffee in wet canteen. Further I took them to play basketball. We came closer to each other and started knowing each other well.

ALSO READ : 10 Things You Must Know Before Attempting Situation Reaction Test In SSB

The next day, GTO Day 1 was scheduled. We were divided into 3 groups and asked to report to 18 SSB’s GTO ground. We had 2 GD’s in the beginning. I participated well and gave facts, data and figures. I was not interrupting anyone and everyone was listening to me. It went smooth and productive. After that GPE went well. It was smooth and productive. Further, We all were called for GOR(snake race). There was a candidate with an injured leg in my group. Everyone thought it would hamper our performance. I motivated the group and took them along with the loud war cry that we had mutually decided. I helped and motivated him throughout the obstacles. I helped him to climb the walls, balancing beams and carried him on shoulder to take him off from the wall. Throughout the GOR, I was shouting the war cry and motivating the group .We finished late but I knew we had done our part. GOR is not at all about winning ,it is all about team and team efforts. I pumped them all and we were taken to PGT AND HGT grounds. My group finished all the obstacles in few minutes .Though I was inside the obstacles and I was getting solutions very quickly. I took my group together and was listening to their ideas also. I supported them and gave many high level ideas.

We went back to our candidate lines and my interview was scheduled. I quickly took shower and wore my formals along with the tie that my love has given me. I was very confident and excited. My interview went for about 1hours and 30minutes,my IO asked me a lot of army based questions like which regiment? why? tanks? guns? structures and organization? specifications? and a lot more about the army. I was very well prepared for these questions. I answered him in detail and he was impressed. Further, he asked many academic questions, calculative questions and general questions from my life, family, place, work place ,salary and why did I join Airforce ? I have answered them in a very clear picture. Basically, I felt that as if my father is sitting in front of me. It went really good and I was extremely happy with my interview session.

The next day we had GTO Day 2, I completed 11 Individual obstacles, my CT was tough, all the movable structures and continuous pressure from GTO about the time and breaking the obstacles. I completed my CT in less than 6 minutes. I had a hint that I have done well in GTO as well. Further, in FGT I was inside the obstacle and was taking group together while implementing the high level ideas. All the GTO tests were over and we were asked to go back to our candidate lines .I was extremely satisfied and confident with my performances. We played basketball that evening also. Everyone was so damn well connected to each other. I prepared my uniform for my conference. And I slept off on time. Next morning, we packed our luggage and asked to report to the shed 2. My conference went for about 4 minutes, Board president asked me general questions about the stay and food. I smartly marched out and after reaching the road i jumped and shouted “YESSSS” in happiness. I calmed myself down and turned back to see if anyone had seen me. One major was visible through the gate of the conference hall. He smiled seeing me doing that.

Senior GTO came along with the results file and he announced that only two of us got recommended .I was thinking about the other name as I knew that one is me for sure. He called my chest number. We marched forward and stood aside. I had a flashback of all the things that I have undergone. I remembered my parents and I was full of gratitude. JUST BEFORE THE CONFERENCE, I had the same cry in my room but this one was a cry of gratitude and pride that I had pushed through and gone through that and I didn’t quit. And it’s these moments, it’s this journey and I felt like I already had the plus sign on my chest. It’s the experiences, knowing that you pushed past times where you wanted to quit. And you got shit done, you pushed through it. From the breakdown to getting recommended in the very first attempt. Failure has made me who I am today. Failure gives you two choices, you stay down or you get up. Well I’m up and fired up because I figured it out. The constant love and support from my family, my teacher, my mates, my friends and my love has pushed me everyday. Thank you for believing in me .🙏