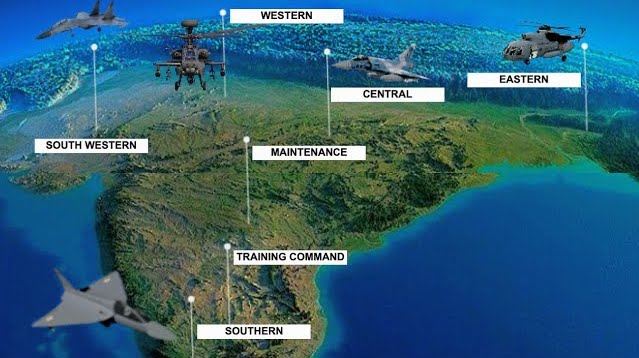 7 Commands of the Indian Air Force

It was first formed at Calcutta in 1962. However later in 1966 Allahabad (now Prayagraj) became the Central command Headquarters.

The command patrols North Central sector of this country from Himachal border to Sikkim. The area assigned to command stretches from Bareilly, Agra in the North to Bihta, Darbhanga in the East and from Indo-Nepal border in the North to Nagpur in the South.

Eastern Air Command (EAC) controls air operations over a vast area that straddles 12 states. It includes the seven north eastern states, Sikkim, West Bengal, Bihar and parts of Orissa and Jharkhand covering over three lakh square kilometres. The area of responsibility includes a 6300 km long international boundary with China, Nepal, Bhutan, Myanmar and Bangladesh. The headquarters of EAC is housed in a spectacular location in Shillong, also called the ‘Scotland of the East’. Apart from the operations from permanent air bases, this command takes immense pride in facilitating airlift and air supplies to remote areas in the country’s far east.

It was first formed at chakeri Kanpur. However later Nagpur became the Central command Headquarters. Setting up of Maintenance Command Headquarters was not exactly a bed of roses since the entire process was delayed and lot of loose ends had to be tied up. Further, this command has grown both physically and in stature and has a presence across the length and breadth of the country through its depots. Today its highly skilled community of engineers and logisticians

Originally established as No 1 Operational Group at Jodhpur on 21 Sep 1972, it was subsequently rechristened as the South Western Air Command on 23 Jul 1980. The operational area, carved out of the Western Air Command, included most of Rajasthan and the entire Gujarat. The crest of the South Western Air Command depicts the national emblem on the top as a pendant of a garland of flowers with “Dakshin Paschim Vayu Kaman” encrypted inside in a semi circle. The centre is adorned by a dagger with wings. At the base, under the inscription ‘Bharatiya Vayu Sena’, is a scroll with the command motto “Jai Shree Varte Veeram”.

Located in Trivandrum its a fully fledged Operational Air Command covering the geopolitical area of peninsular India and Indian Ocean.

Headquarters of Western Air Command is located at Subroto Park, New Delhi. It has 200+ bases under its command and has been a part of all major operations in India since independence. Additionally, Due to its geographical location the Command has always been the hub-center of all operational activities. Therefore, it has been a part of operations such as Kashmir, Sino-India, Indo-Pak, Operation Pawan and Operation Safed Sagar.

How Does The Indian Air Force Operates?