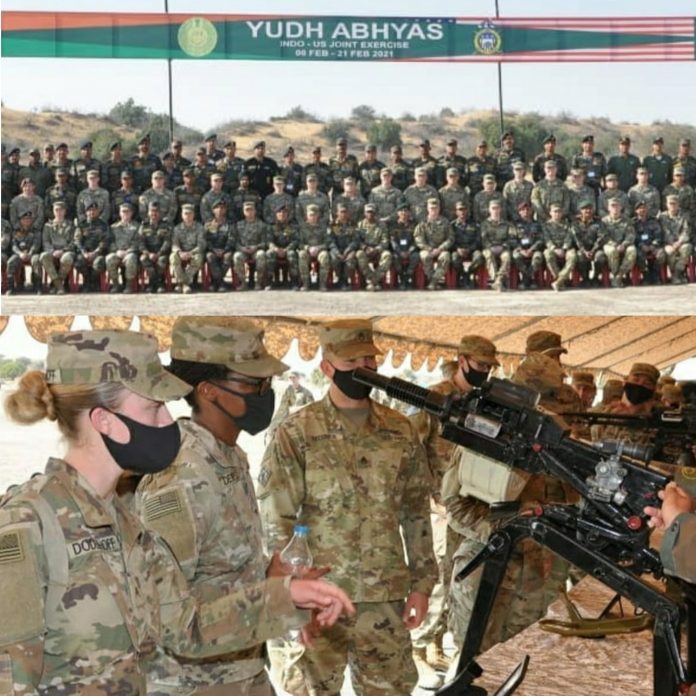 India and USA Joint Military Exercise Yudh Abhyas began on Monday 8 Feb 2021 in Mahajan Field Firing Range, Rajasthan. This is the 16th edition of the Yudh Abhyas Exercise and is hoisted by India. The edition of Yudh Abhyas was conducted in Agra, India in the year 2002.

The contingent of the US Army arrived in Rajasthan and underwent the Covid test before commencing the Exercise. Brigadier Mukesh Bhanwala, Commander of 170th Infantry Brigade welcomed the US Contingent of 270 soldiers in India for this bilateral Exercise.

“He laid stress on the importance of the free exchange of ideas, concepts and best practices between the troops and the necessity to learn from each other’s operational experiences”, defence spokesperson Lt Col Amitabh Sharma said. The Exercise is aimed to learn from best practices from each other in Counter Insurgency Operations, Warfighting capabilities, Disaster Relief, and Humanitarian assistance. The Exercise will also increase the capabilities of Interoperability of both forces in time of need.

Aerial platforms like Rudra Attack Helicopter, Mi 17 V5 Helicopters, and Chinook Helicopters will be participating in the exercise. Apart from air support, Infantry Combat Vehicle BMP II Sarath of Indian Army and Stryker Vehicles of US Army will be utilised in the Yudh Abhyas Exercise.

Indian Army’s 11th Battalion of Jammu and Kashmir Rifles and soldiers of US Army’s 2, Infantry Battalions, 3, Infantry Regiments, and 1-2 Striker Brigade Combat Team are taking part in the exercise. The exercise will conclude on 21 Feb 2021. This drill is conducted right after the recent Indo-France Desert Knight Air Exercise in the same western sector of India.

Also Read: Aero India 2021 Gets Off To A Flying Start In Bengaluru