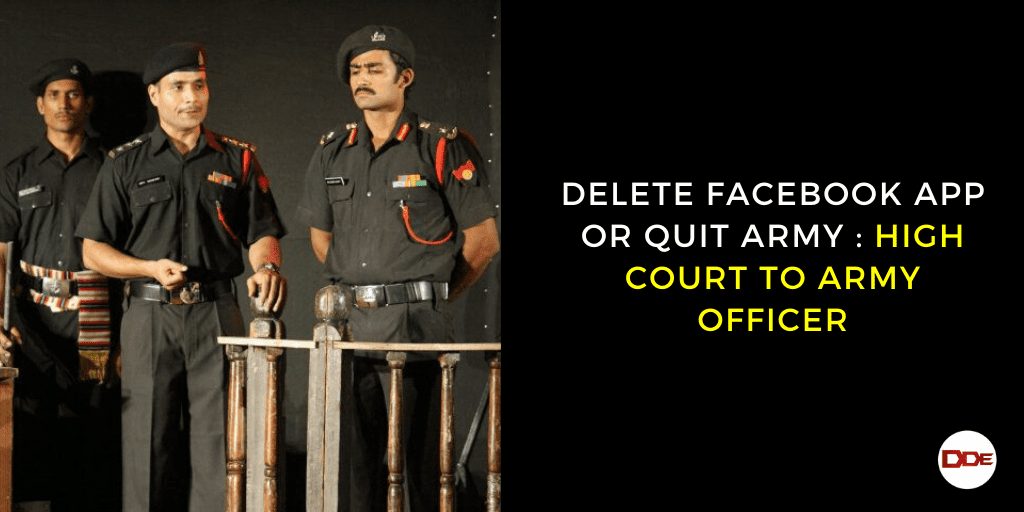 Delete Facebook App Or Quit Army : High Court To Officer. The Delhi High Court Tuesday declined interim relief to a senior Army officer, who challenged the Indian Army’s recent policy banning personnel from using social networking platforms like Facebook and Instagram, saying he had to either abide by the mandate or put in his papers.

A bench of Justices R S Endlaw and Asha Menon said it had not found a reason to entertain the plea, and therefore, “the question of granting any interim relief does not arise”.

“Especially when the matter has the potential of concerning the safety and security of the country,” it added.

The court was hearing a plea which sought direction to the Director General of Military Intelligence to withdraw its June 6 order which mandated all members of the Indian Army delete their accounts from Facebook, Instagram and 87 other applications.

Lt Col P K Choudhary, who is currently posted in Jammu and Kashmir, said in his plea he was an active user of Facebook and used the platform to connect with his friends and family as most of them were settled abroad, including his elder daughter.

In the petition, the officer also sought direction to the Ministry of Defence to withdraw the June 6 policy to ensure the fundamental rights of armed forces personnel are not abrogated, amended or modified by arbitrary executive action which is not backed by the mandate of law, offends the provisions of the Army Act and Rules made thereunder, and is unconstitutional.

The HC, however, said he has a choice to make and asked him to delete his account as the policy to ban the use of social networking platforms for army personnel was taken keeping in view the security of the nation.

The court said he could create a new social media account later.

“No. No. Sorry. You please delete it. You can always create a new one. It cannot work like this. You are part of an organisation. You have to abide by its mandate,” the bench orally observed. “If you are so dear to Facebook, then put in your papers… See, you have to make a choice, what do you want to do. You have other choices which are also irreversible.”

The court asked the Centre to file the policy document in a sealed cover for perusal by the bench and said the reasons for taking the decision be also filed. The court will now hear the matter on July 21.