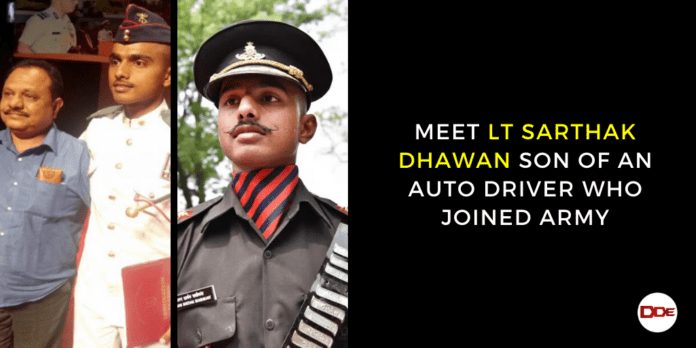 For newly-commissioned officer Lt Sarthak Dhawan, the Passing Out Parade at Indian Military Academy on Saturday was the accomplishment of a lifelong dream. Having seen his parents struggle hard to provide him quality education, he always wanted to make them proud for all their efforts.

Lt Dhawan said that his father has been ferrying schoolchildren in an autorickshaw for over 30 years. “I have seen my parents struggle for everything and always wanted to make them proud. Today, I have fulfilled that dream by joining the Army.” He first completed his training at the National Defence Academy, which he had got through in the first attempt, before joining IMA. Yet, his excitement was marred by a certain gloom. “My mother is no more to see me in this uniform but I know that, somewhere up above, she would be blessing me,” he added. He also said that he was missing his father and brother at the ceremony.

Shashikanth has been plying an autorickshaw in Kolhapur for the past three decades. He gives full credit to his son’s iron will, which did not let him falter even when his mother died in a tragic road accident four years ago. “It came as a big shock, but he did not shift his focus from studies and cracked the NDA entrance on his first attempt.

Sarthak, a Romeo squadron cadet during NDA, studied at the St Xavier’s High School in Kolhapur and completed his HSC from the Services Preparatory School (SPS) in Aurangabad. He said it was his childhood dream to become an army officer. “So, I joined the Maharashtra Cadet Corps (MCC) in school and studied at the SPS to prepare for the NDA entrance exam,” Sarthak said.